On Friday 16 April, Kam Decker-Harris (aka kamtron), Eric Noll (aka eze), and I launched on an exploratory mission to the Damnation / Triumph / Despair area, curious if it was feasible to take a more direct route via Damnation Creek to access ski lines from a camp at Triumph Pass. The approach unfolded about as well as could be hoped, and we enjoyed a few days in this seldom-visited wilderness.

Given the snow conditions during a time of transition in this zone, this trip more heavily weighted the mountaineering part of ski mountaineering -– it was more about travel through the mountains than the quality of the downhill turns. A person might even call it bad snow, but any snow is good snow that covers the alder, downfall, scrub cedar, loose scree, and slick slabs that predominate in this downright Pickets-ian area. Having suffer-traversed some of our access path in the summer after climbing Despair’s N summit via its eastern buttresses, I was grateful for the relative ease with which we entered and exited.

Anyway, on Sunday 18 April the objective at the top of our list did get skied: the south face of the south (true) summit of Mt Despair, continuing down gullies to lake 3,951’ for a total descent of 3,300 vertical feet: 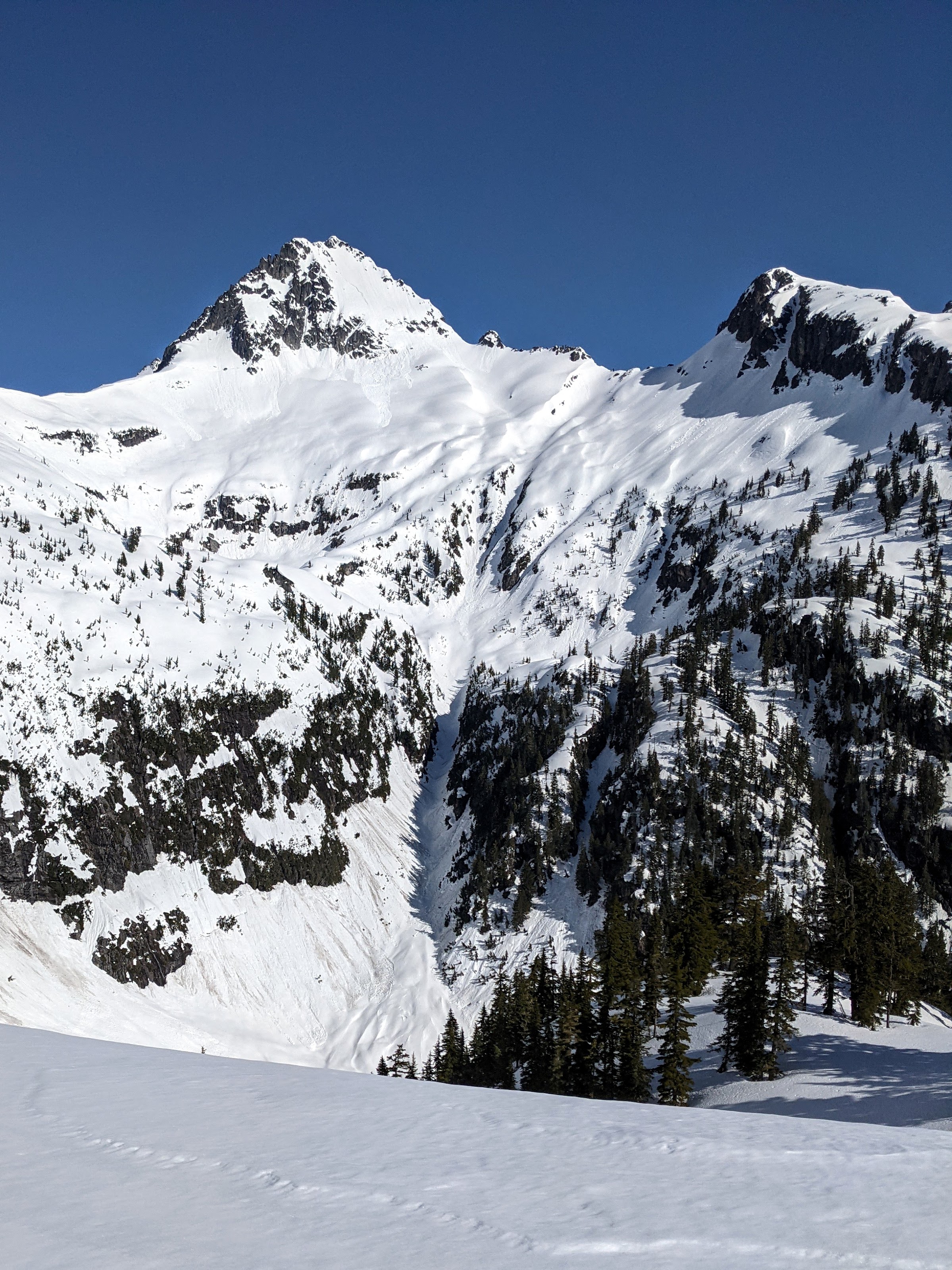 An aspect of this objective that made it interesting to me: Mt Despair was Fred Beckey’s first-ever first ascent. With Lloyd Anderson and Clint Kelly, in 1939 he climbed the southeast route, which combined the lower southeast ridge and upper south face. For purposes of risk management, we climbed a similar route, then skied the south face, exiting through a cruxy gap in the lower cliff band. 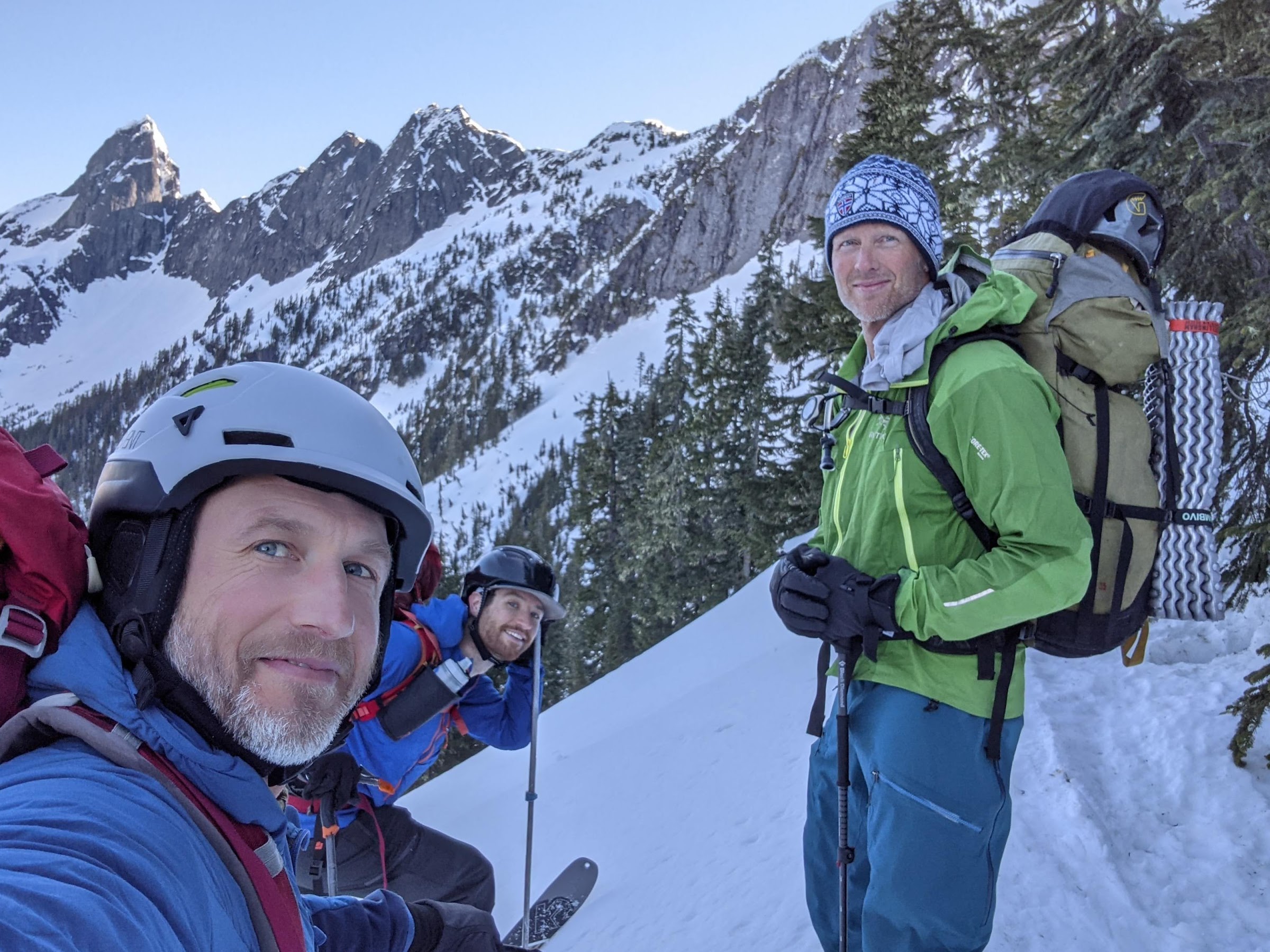 The approach went up an abandoned road that parallels Damnation Creek, over the pass (where the above photo was taken) into the valley, and then to Triumph Pass. In deference to the hot afternoons, every day alarms were set for 2:30am.

In the wee hours of day 2, observing an insufficient freeze, we abandoned any plans for substantial touring. We did ski down to the nearby lake and soak in the scenery -- southern Pickets, Triumph, etc.
Panorama from Lake 4794', north of Triumph Pass:

We returned to the pass/col, and elected to spend another night in hopes of a better freeze. The blazing sun required shelter, so we constructed a shaded bar/lounge (eze pic): 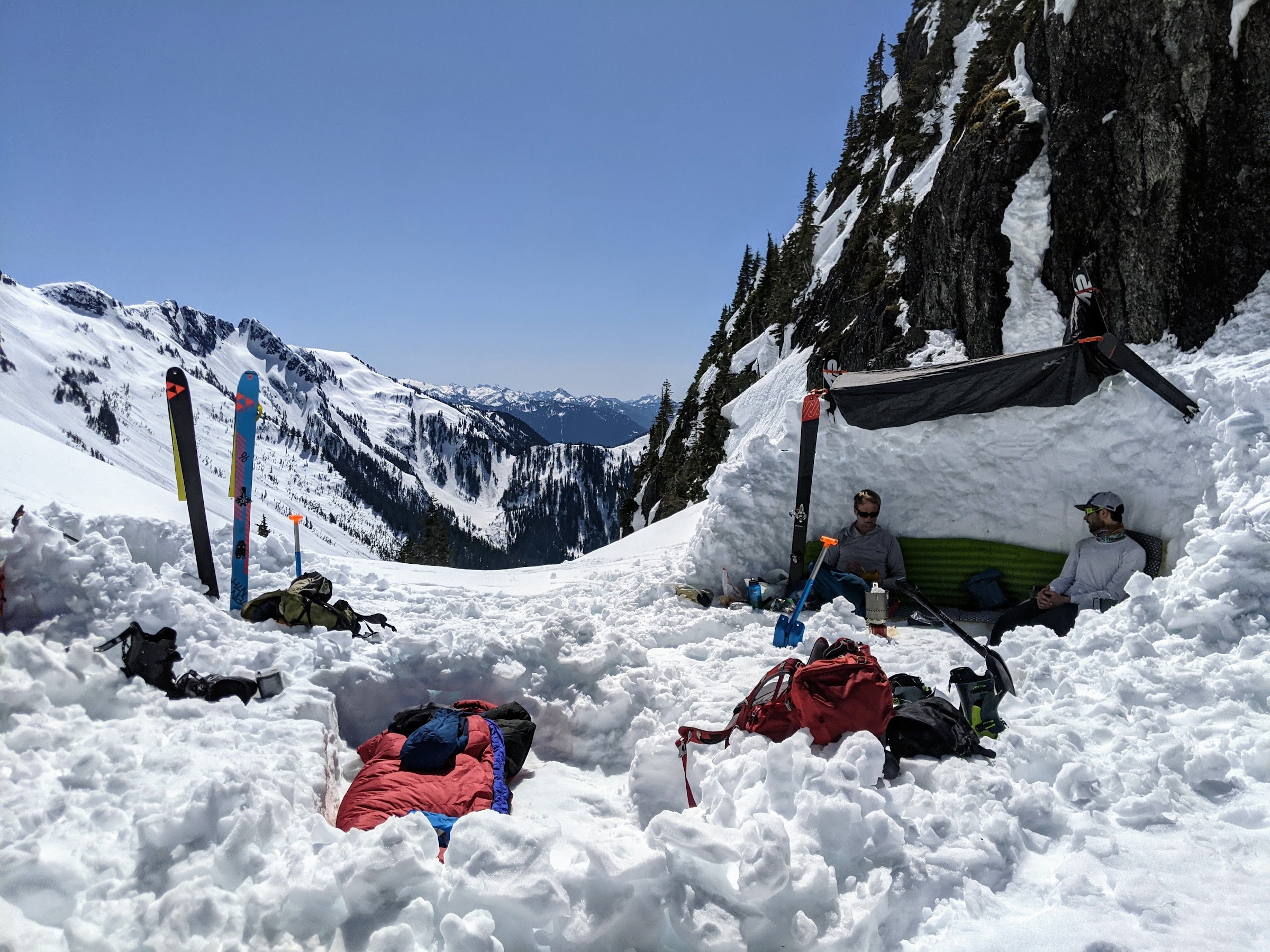 Card games, Fernet-Branca, good scotch and lots of food in a mountain palace--not a bad way to spend an afternoon. Temperatures dropped a bit more that night, encouraging eze and I to at least have a look in the early morn, vowing to pull the plug if we became uncomfortable.

Skiing by 3:30a down to the 4794' lake, skin up 1K' to a long, contouring headlamp-lit glide across intermittent avy debris to another lake below Despair, and a combo of skinning and cramponing got us to the base before 7a. Climbing and skiing and climbing under the Milky Way was spectacular, as was the dawn. On the southeast ridge and face we found the irregular rhythm of slush, firm runnel crust, and soft snow.

eze nears the base of the s face; in background, Mt Triumph rakes the sky, and immediately to its right is our campsite at the col: 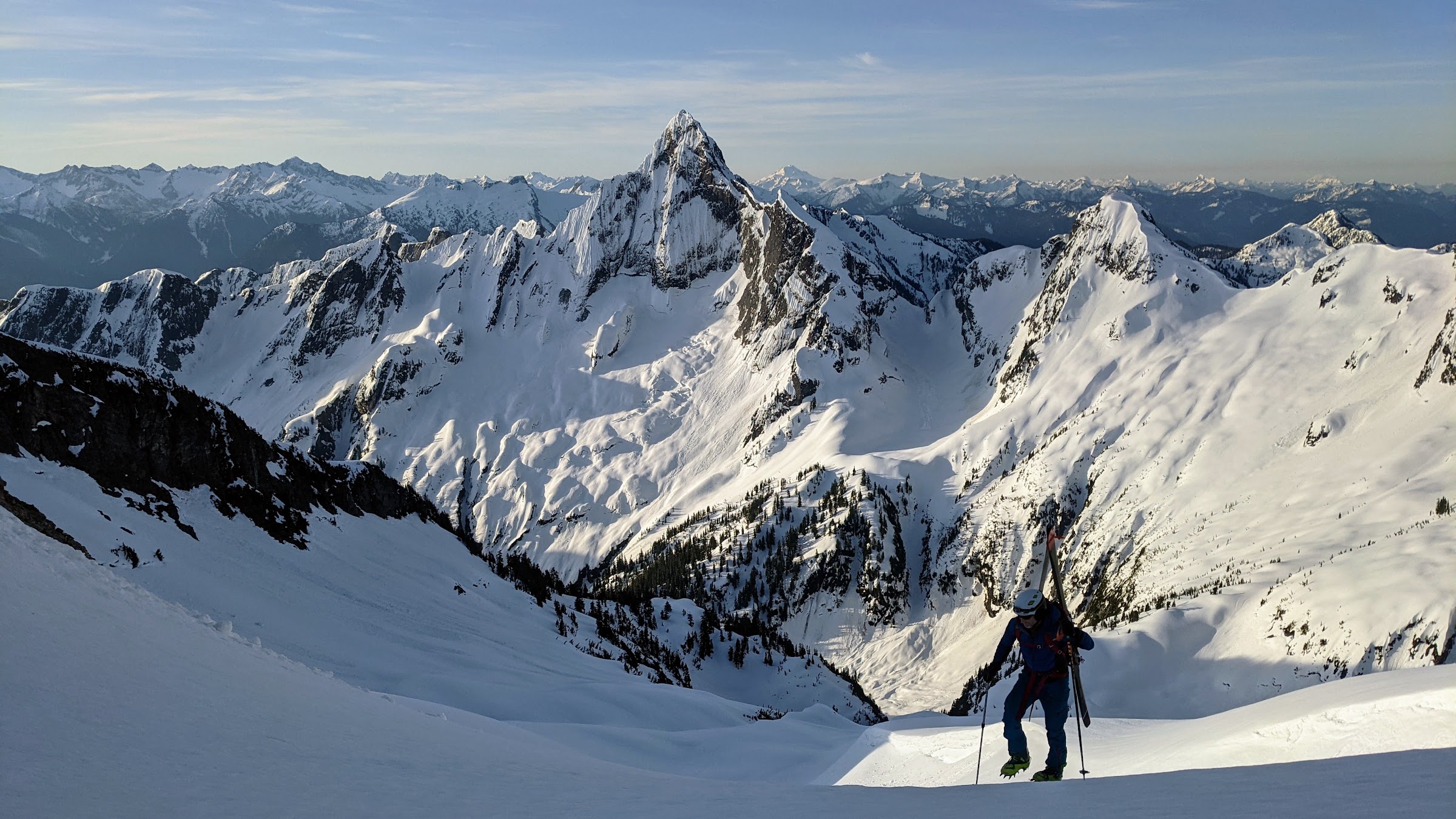 Here I begin the climb of the business district, up the se ridge and s facce (eze pic):

eze following some initial funky weaving on the se ridge: We found the rhythm of climbing slush, firm shallow runnels, and soft snow. Travel was not straightforward nor fast, despite our hustle. Careful route finding and self-belaying eventually yielded the summit, a little later than we had hoped, but the temps did not yet threaten.

A handful of mixed moves surmounted the rock/ice/snow summit block. We skied from maybe 25' below the summit mushroom.

A summit shot from Mt Baker through the Pickets:

And a shot down the line from the summit: We knew from the climb -- and from afar for that matter -- that the skiing would not be great, but the exhilarating position more than compensated. Turns were acceptable, with confident edging in the spring-variable mix of supportive crusts and lingering mush.

After my first turn/cut, pretty psyched to be here (eze pic): 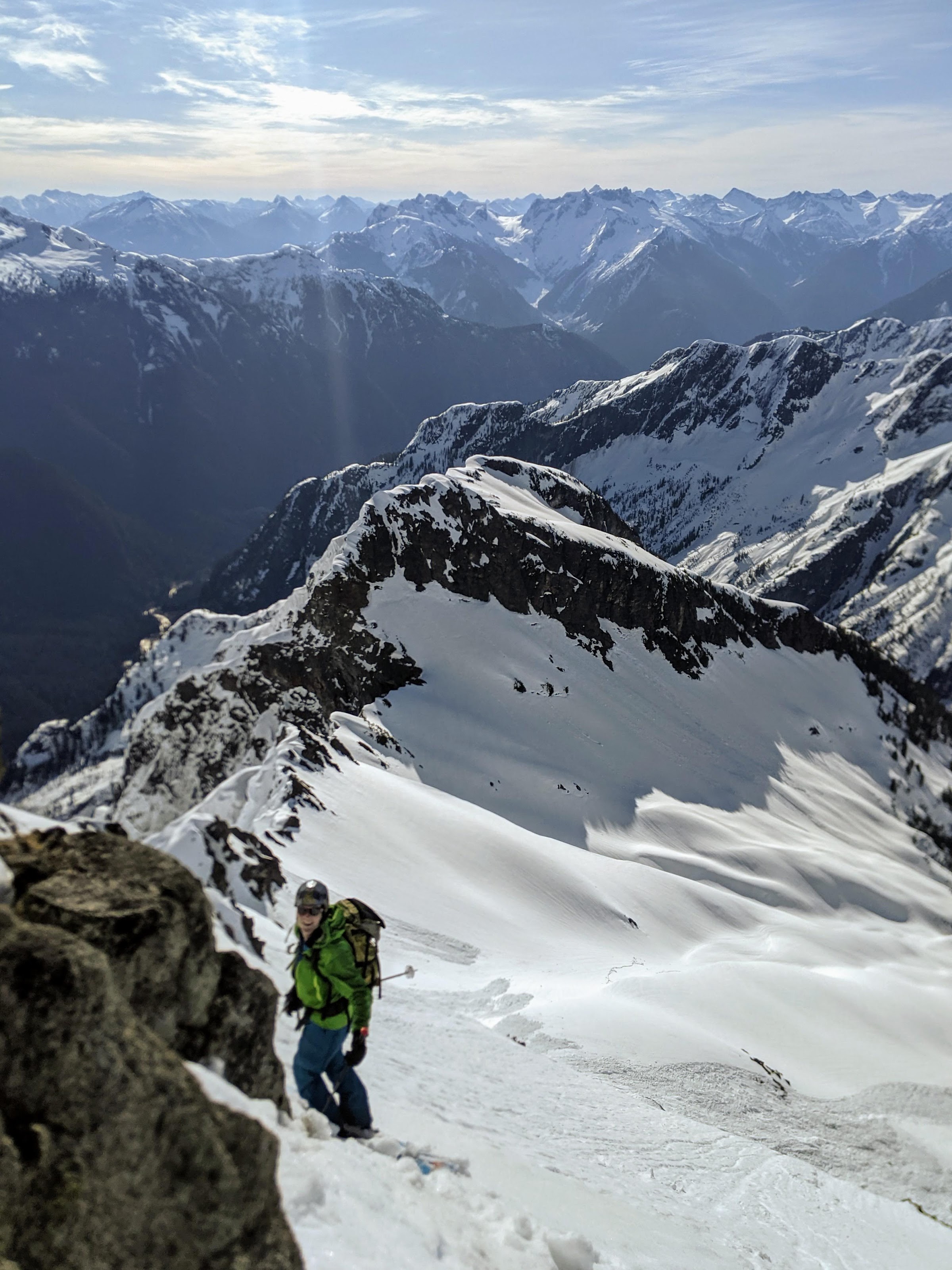 Once we began skiing, we did not linger for pics. Over 3,000' feet of mostly fun skiing later, we landed on the lowest lake in the basin, then motored up an opposing gully to eventually gain our camp. We quickly packed up and blurred homeward, racing the afternoon heat.

Only a little bit of this stuff on the abandoned road exit: Overall, a gratifying trip with a nice balance of effort and mtn chillin'. The face probably skis best in the winter, provided you can find stability on all aspects of the approach. By the time it corns up, the approach is likely unsavory.
Top