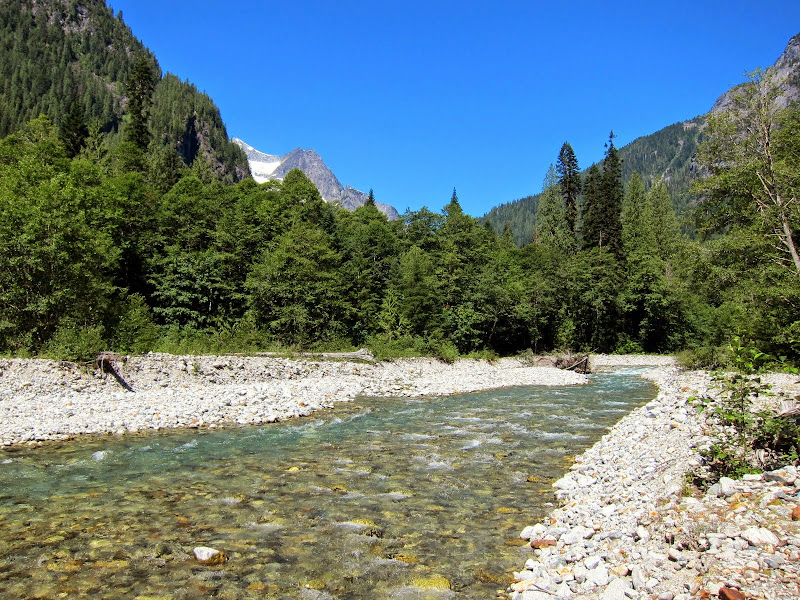 (Our first glimpse of the double buttress from banks of Goodell Cr.) 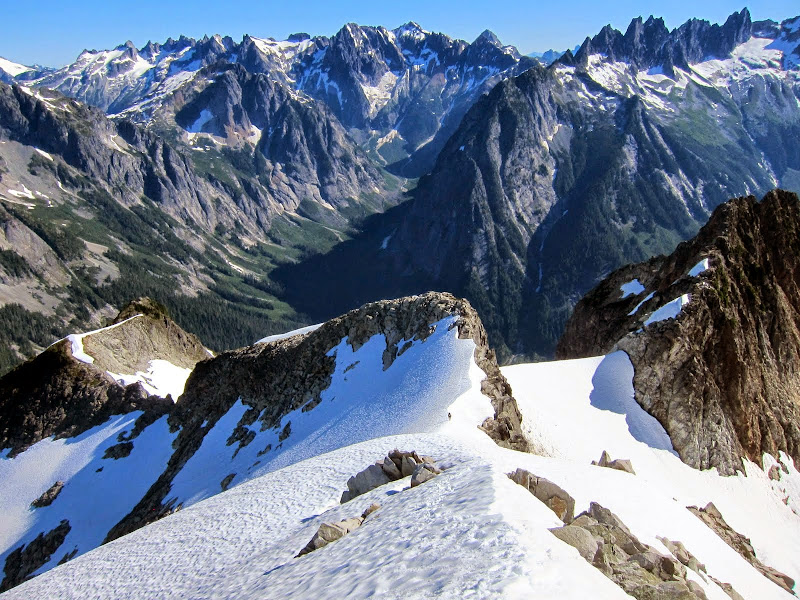 (Rolf climbs the final snow arête of the N Ridge to the N summit of Mt Despair. The highpoint of the NE Buttress is barely in view on right. Pickets background.)

Route summary: the NE Buttress (“Bipolar Buttress”) of Mt Despair, ~3700’ net vertical relief of climbing and scrambling; a few hundred more are climbed thanks to multiple rappels into notches along the way. Difficulties up to 5.9. (Rolf nailed the name.) I think we belayed a total of 9 pitches, 8 on the buttress and 1 to attain the N ridge?

This shot taken from the southeast shows the NE Buttress toeing down into Goodell Cr. Photo courtesy of John Roper (forgot to ask: from where was that taken? fill in blank later). 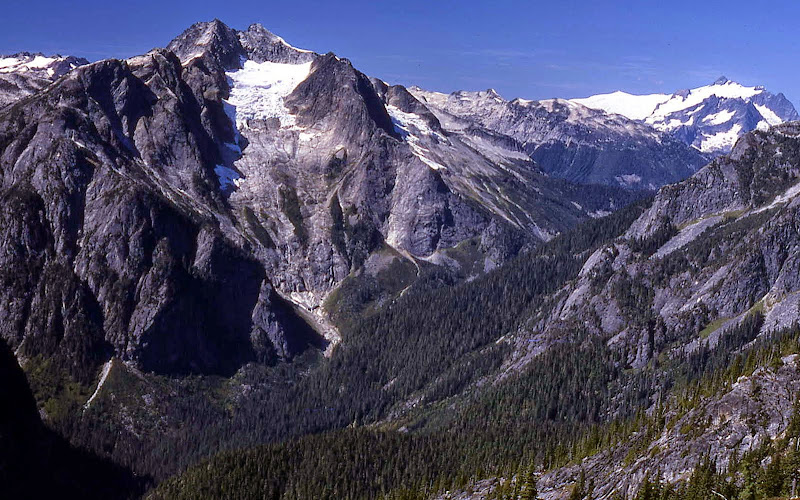 We began climbing at the base of the big open book in the area of lighter rock on the lower buttress.

The feature can also be seen in the background of this shot taken from Mt Terror last summer: 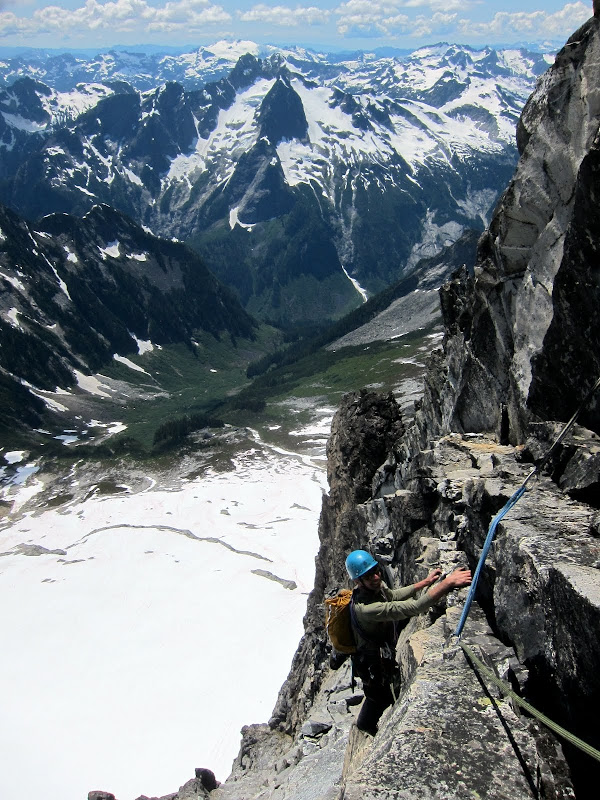 Trip summary: a delightful tour of Picket-ness proportions; we approached via Goodell Creek, climbed Mt Despair via the soaring NE Buttress/N Ridge continuation, descended Despair’s west flank, and ultimately exited via Triumph Pass and Thornton Lakes trail to a bike, where the lucky loser of roshambo commenced the 8ish mile ride to retrieve the car. Lots of ups and downs. (On a map, this looks like a reasonable horseshoe route. Plan for three demanding days.)

More-enterprising types might more fully express this route by traversing from the N to the S summit, thence to Triumph Pass and home; we left this for future work due to budget constraints of calories and time.

A good thing too, as I botched the de-proach; in a monomaniacal fit of hubris, neglected to thoroughly research the route from Triumph Pass to the Thornton Cr trailhead, instead relying on simply a map and odd recollections. As a result, deep into the third day, we achieved new psychological limits by rat-schwacking up a 600+ vf stretch of steep, dense brush. My bad, brah.

A soi-disant Cascades dignitary pronounced this a Last, Last Great Problem of the Cascades, while the other side of same mouth pronounced it “table scraps”. The Bipolar Buttress is more akin to eating a spilled gourmet meal off the floor, tasty if a little dirty--the floor in this case is the Goodell Creek valley.

The NWMJ notes Roger Jung used Goodell to score FWAs on Mt Fury, but my contacts with real Cascades dignitaries yielded little info re: optimal access in the brushy summer. Sundry, pleasant surprises await those who in future travel this way.

Scrambling the lower buttress. Around 1300’ of mostly solid and well-featured scrambling up to low fifth class. 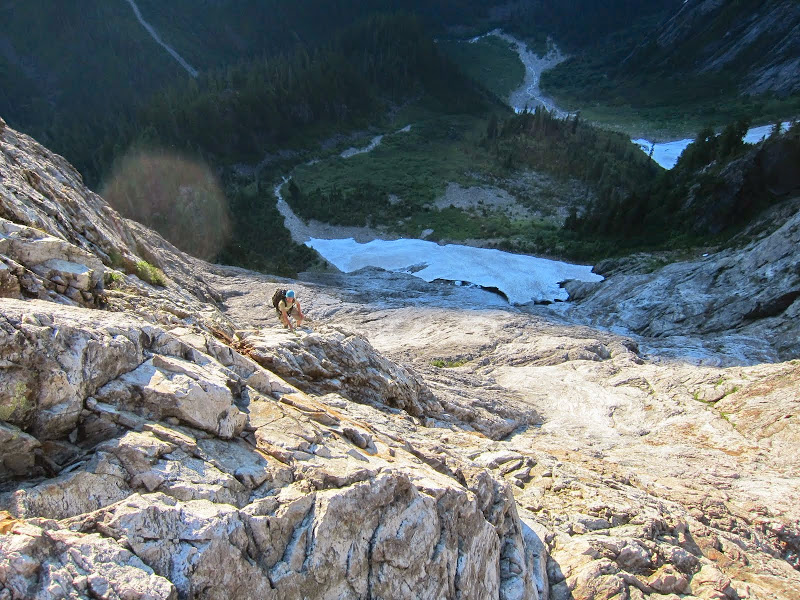 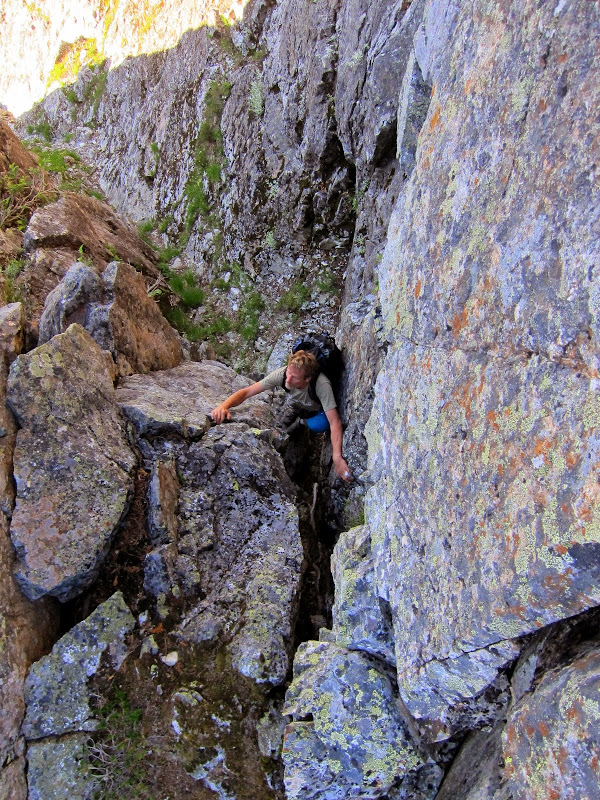 From top of lower buttress, we rappelled into a notch; a party could bail from here at relatively low cost. Beyond this point, costs increase.

Rolf leading out of a notch after a rappel. 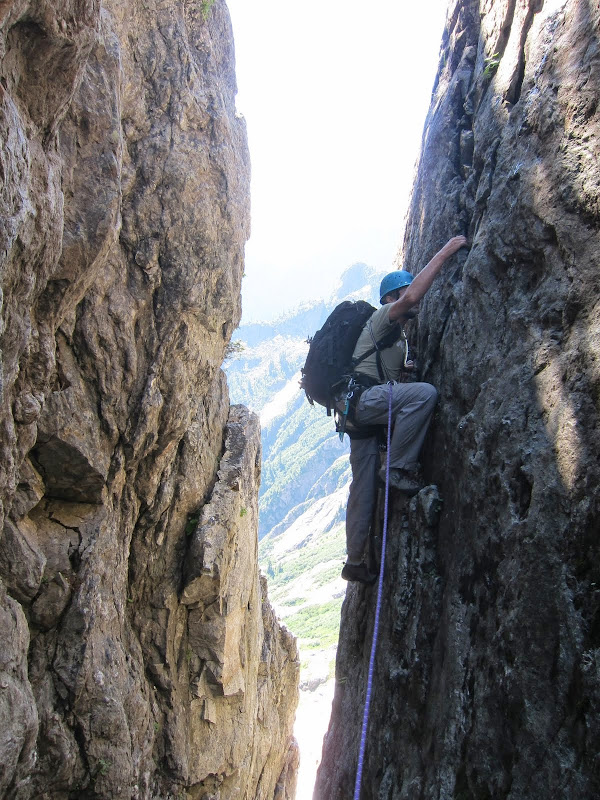 A very deep cleft in the upper buttress weighed on our psyches during the whole climb; the most technical pitches had occurred climbing out of smaller notches after rappelling into them. This deeper cleft can be seen in Tom Sjolseth’s picture from the N. Only the upper buttress is visible here, extending left—the cleft is near the summit of the buttress. 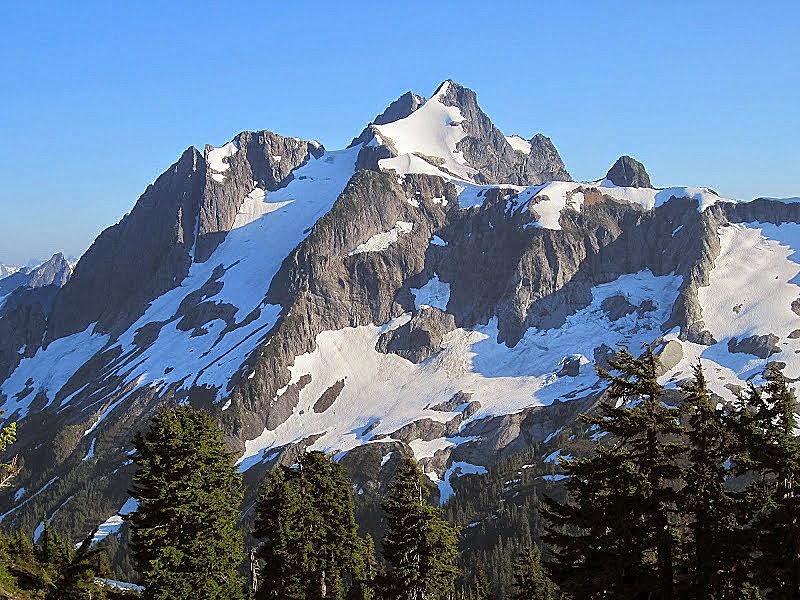 With apologies to Jimi Hendrix, this is the Manic Depression. New lows were hit upon closer viewing of the chasm. The wall we needed to climb appeared very steep, overhanging in places, and meager viable lines looked difficult to access. We rapped in and scoped around, finally settling on a route beginning maybe 50’ to the south of the notch: a right-trending stair-step ramp kept the climbing at a reasonable grade. Watch for loose rock here. 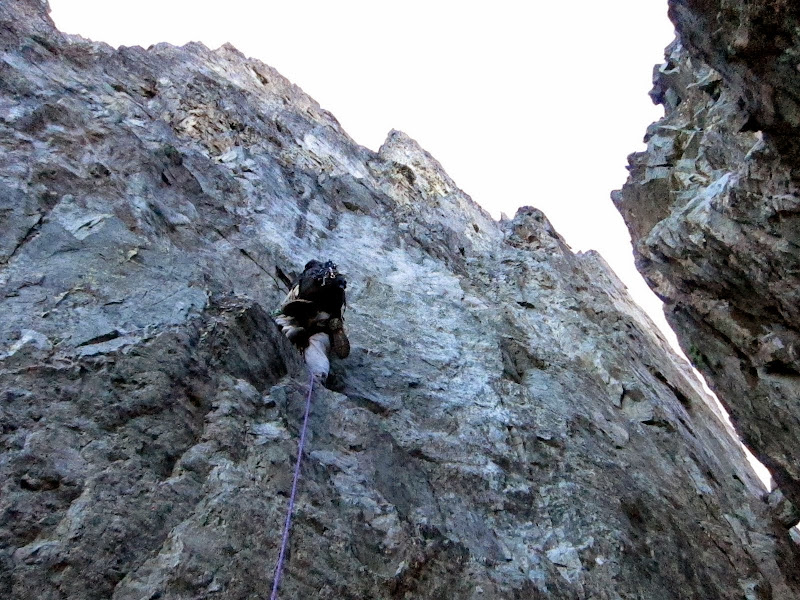 Rolf led the first pitch, and I got the leftovers; a bunch more rambling (an exposed stretch felt like the TFT) and we found a dee-luuuuxe bivy site on heather near the high col, where the two E-side glaciers meet. Views into the Pickets were available all day, and made even more enjoyable by respite. Smoke filtering in from eastern Washington provided color. 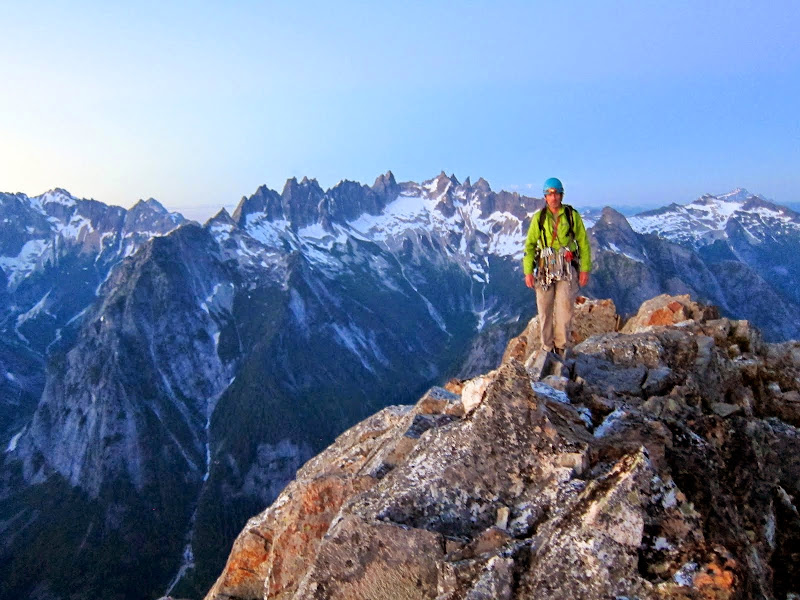 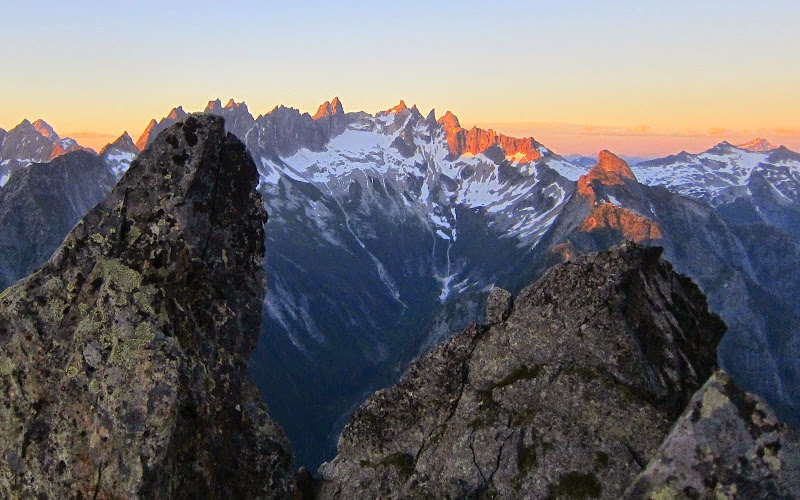 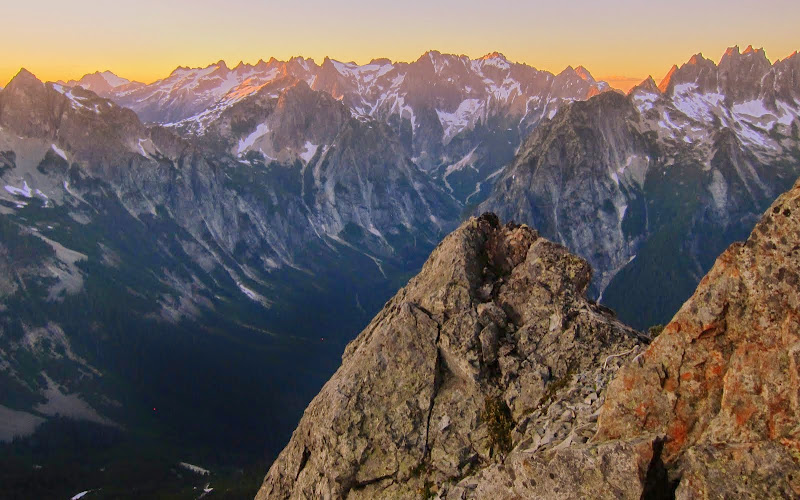 The next morning we crossed the high col, climbed a 70m pitch of rock to the N Ridge, and then continued on its final snow arête. This pic shows the upper buttress (blocks view of lower buttress) on the right, with Goodell Cr far below. 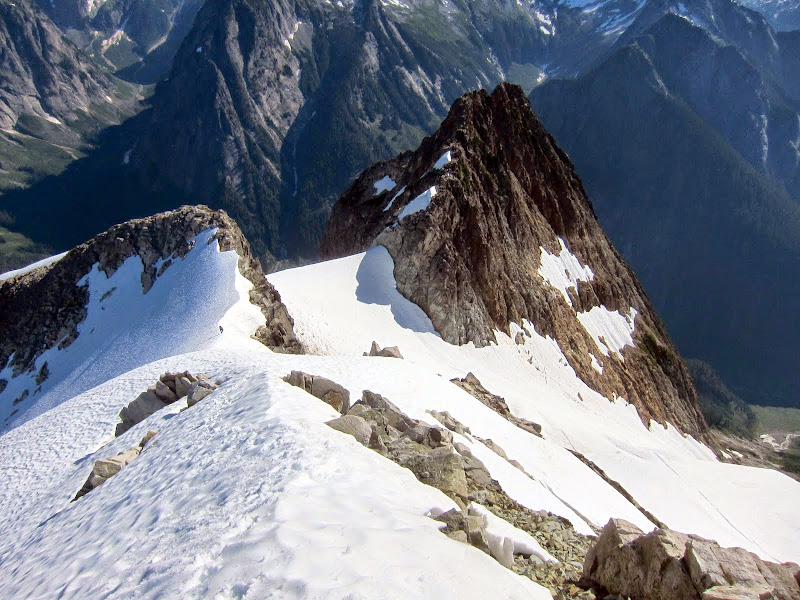 Descent was made by downclimbing to the notch S of the N summit, then down the W side of the peak; one rappel required.

I'm shaking my pom poms for you, OG. Nice pictures.


Did you see the Hummel ski video from Despair to Bacon environs? That was some good entertainment.
Top

hahaha ross yeah i'm ready for a short approach to nice rock...i think they have that around here.
also think the 3 days knocked like 10+ pounds off my frame, so should feel a bit stronger once on the rock.

thanks sky, like the viddy you posted and Jason's too. it's a lot of work to get back there no matter the season or cardinal direction. definitely has that remote ambiance though--you get that sorta enriched feeling in your bones. oh, forgot to mention we spooked a big bear along Goddell Cr--thing was feasting on all kinds of berries, including wild strawberries! i don't see/eat those that often.
Top