The SkiSickness Asylum. Discussions and other things that aren't trip reports.
Post Reply
10 posts • Page 1 of 1

...or not quite. I figured I'd divulge into the details of my mild retardation in a more private place.

So after Maddy and I were sitting on that ledge, we threw our jackets on to stay warm. Our anticipation was that we were going to spend the night on the ledge and have to climb out the next morning. We still had 2 sandwiches and a liter of water.
Since we were parked in the Red Rocks loop, we figured that any cars left there would be reported as missing hikers to S&R, which is exactly what they do up in Canadia in parking lots that monitor cars. Since we didn't want anyone wandering around trying to find us all night, we called the emergency number to let them know we were OK, but were going to spend the night 200 ft from the top of Rose Tower. We filled them in on the fact that we had food, water, and relatively warm jackets, but had failed to bring a light source. They told us they were going to send in an air unit to locate us... uuuh. ok.
I was naive, and assumed that they wanted to make sure we were safe, and not being more idiotic than we had already been. We used our camera flash to give them our location and a helicopter hovered around us for a while, then it flew off. I waited for another phone call from the emergency services (none came).

30 minutes later, we saw the helicopter returning. As it got closer we could see that there was something (someone) dangling below the helicopter. As they approached it was obvious that we were getting picked up. They flew in and hovered above us, slowly dropping in elevation till the guy dangling beneath the helicopter was on the ledge with us. He was far enough under them that the helicopter was almost above the top of the tower and the rotors were well clear of anything. That was still some very impressive flying though. Maddy un-tied from the rope, and clipped into a prussik cord from the rescue line, and off she went.

They returned for me 20 minutes later. I pulled out the gear I had put in and shoved the rope into our back-pack. I crouched low on the rock as the helicopter hovered over me to avoid being blown off the exposed ledge. I clipped on to the prussik cord and we flew off. When we touched down, I was a little confused. I had only called S&R to let them know that we were safe and to not search for us. They never really gave us a choice or asked us if we needed to be picked up. I guess they figured that if we were calling them, then we needed to be picked up. Anyway you look at it, I wasn't happy that other people had risked their lives for me, and I also wasn't so excited about the potential cost of the whole operation. I was quite shocked when they told me that it was free, but it doesn't take away from the fact that I fucked up and didn't have to deal with the consequences. It being free actually almost makes me feel like more of a cop-out. If we were hurt, or our rope had gotten stuck somewhere, it would have made more sense to pick us up. But 2 healthy people with food and water? I probably would have let us suffer if I was the one making the decision.

I spoke with the S&R officer the next day when he called with some follow up questions, and I asked him about this. He said that they don't want people getting themselves into more trouble by trying to move in the dark and either killing themselves or seriously injuring themselves.
This makes sense, but I definitely don't think we would have moved from that ledge.

So... we had to get rescued from a 4 pitch 5.7. I don't think I'll ever under-estimate Red Rocks again (I hope). I've also learnt how to translate pitch length from feet to meters and make sense of it. And I have a very good impression of the Nevada state police department. They were also very nice and professional people. A lot of the officers involved were climbers themselves, and had gotten themselves into their own stupid situations.
I'm just the tourist that under-estimated the desert and the spank it could lay out.


a picture of the route taken on Monday. We were 300 feet straight above the tree in the center of the picture, and 200 feet straight down from the summit. The route comes up from the bottom left of the photo. 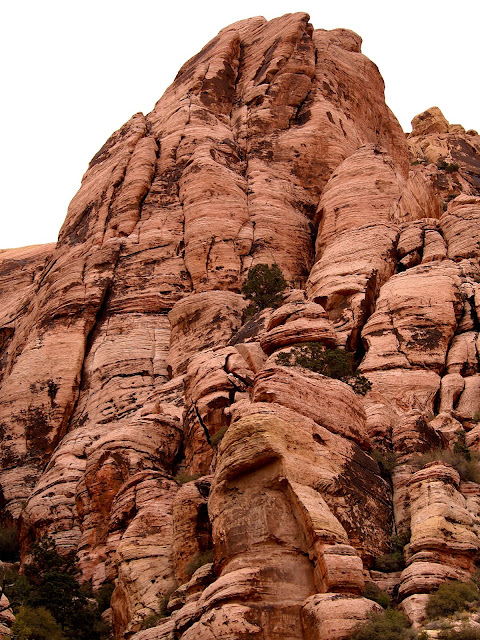 Ha ha ha. Thanks for sharing. Red Rocks is actually pretty soft for desert climbing. Glad you're all right.

I just changed the settings on this forum for you. Previously bots could crawl it and the pages might show on a search engine's cache, but now that's disallowed.
Top

You're just a n00b. You'll be hard and crusty in no time.
Top

Aha, here it is. That's kind of funny that you got helicoptered out like this. At least you didn't have to sleep uncomfortably on a rock that night, on the bright side of having a bruised ego.
Top

Happens to the best of us. I almost had to e-bivy on Reed's Pinnacle, about 200 feet from the road, a couple years ago after getting a rope stuck - and all I was wearing was a pair of shorts. Luckily I was able to decapitate my rope with a sharp rock and make about 50 20 meter rap's back down.
Top

my only time in red rocks (march 1991) was also my only unplanned bivy. after toping out on solar slab (5.6, 10 pitches) we could not find the descent (the old guide book was useless) and then it got dark. then it got windy, then it got very cold and then we snuggled for a very long time until it got light again. I could bore you with what little clothes we had on but suffice it to say, it was not much! it was also painful to watch our friends down below sitting around a campfire. maybe a heli would have been nice

the next day was many raps in the hot sun without any water.

recovery consisted of driving to Moab and climbing the Kor Ingalls route on Castleton.
Top

HA! Finally just now tuned in for "the rest of the story"...good stuff. Chances are there'll be more humbling incidents still to come.

Not sure I ever heard that story, Pete. That would be an embarrassing spot to spend the night.
Top

Layton and I had to chop about ten feet off my rope after the first rappel off Orange Clonus last week. Red Rocks must be the best place in the world for getting a rope stuck.
Top

sounds fun! in europe you can start whenever you want because the heli will always come and pick you up if you don't get done in time. just make sure the weather is nice. you also don't need to bring ropes for glacier travel but if you wear a harness it makes it easier for mountain rescue to get you out of crevasses

i once bivied 2 minutes from the hut that we couldn't find because it surprisingly got dark at night, not sure if that counts . not in europe, obviously.
Top
Post Reply
10 posts • Page 1 of 1