Conditions aligned for lower north-facing steep slopes 1.5 weeks ago, and when I broached the idea of an absurd foray to ski 4K of big four-yay, Dan was quick with the thumbs up for a possible high five. When the objective came into view on Sunday evening (just a few miles of road skinning), I think we both swung from agnosticism through despair and finally to hopeful optimism: 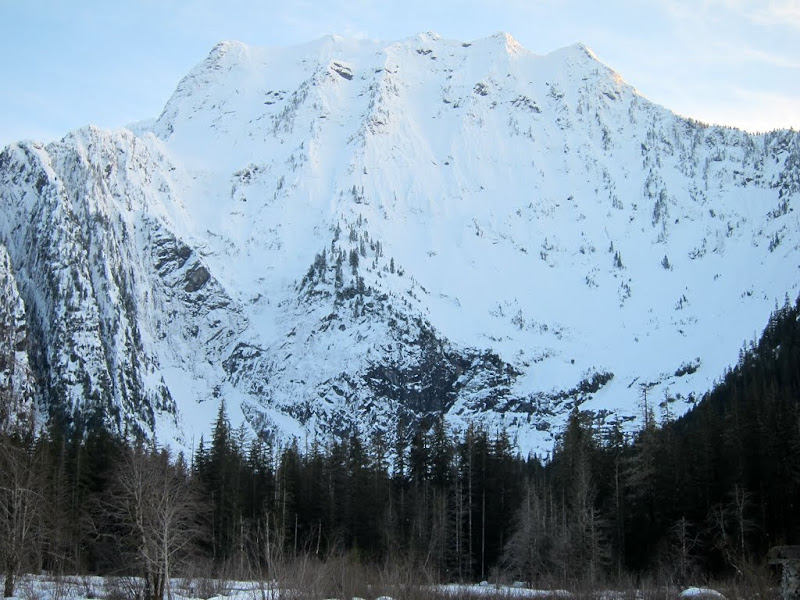 We pushed on across the creek, and set up for a brief bivy only a half mile or so from the face. We got going at dark-thirty and after a quick approach, Dan led the first technical bit up the occasionally treed lower cliff band, holding waterfalls and rotten snow and spicy mixed moves, way right and out of view in the pic above. From here, we'd primarily encounter deep but stable snow blanketed all over that stupendous face.

Skinning and wallowing in deep snow ensued, but our hopes of skiing one of the shots on either side of the central rib were dashed by sections of daunting ice, which would require a rappel. We were equipped for that, but favored an uninterrupted ski descent, so continued to move left (east) near the base of the face's steeper parts until we found a line that went. 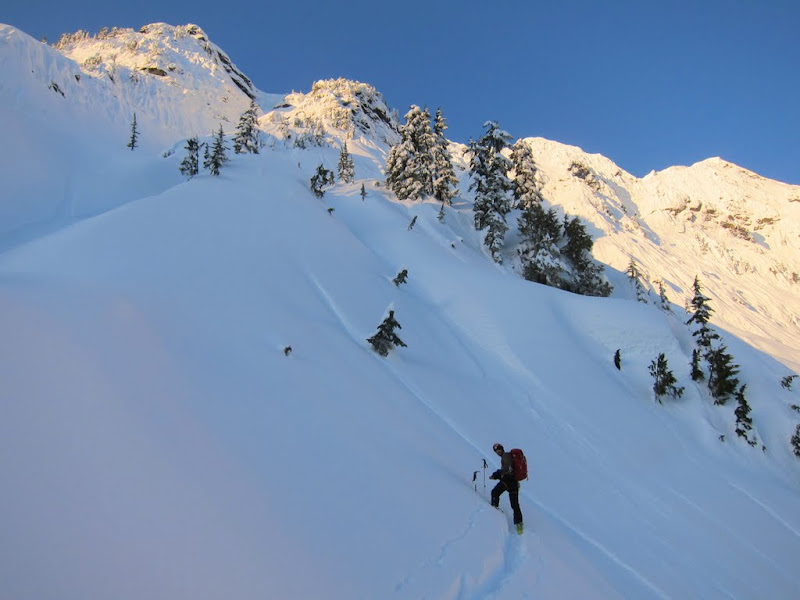 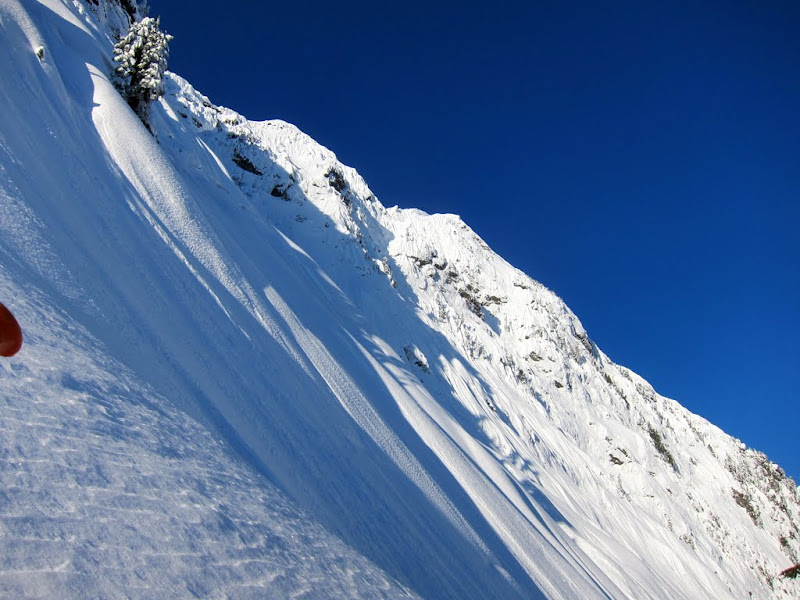 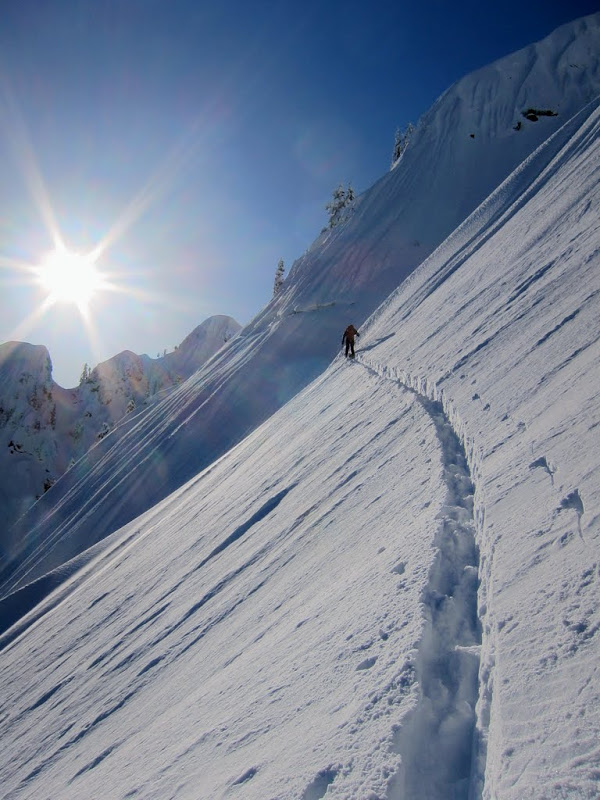 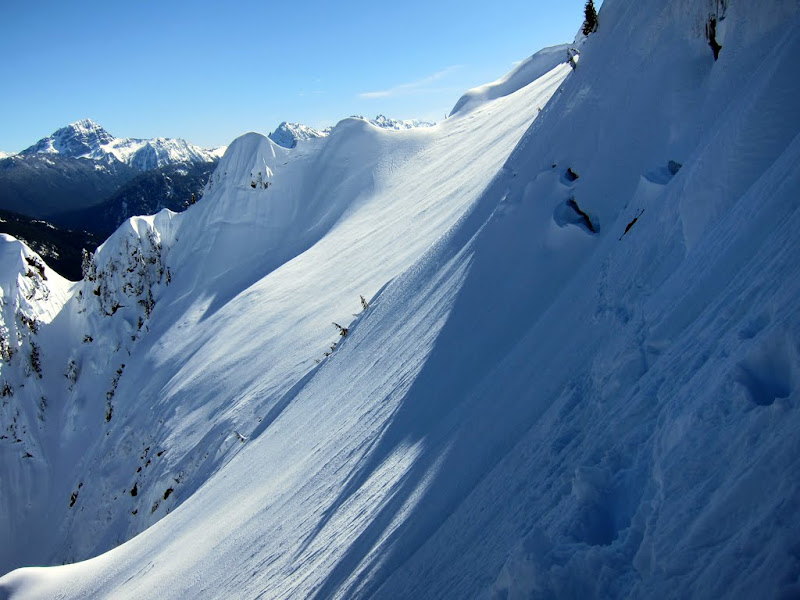 What appeared a viable route contained some ice, but also seemed a much more feasible ski, with sheer options on either side of the ice. Here Dan clambers up white ice; eventually we'd surmount that and resume steep wallowing alternating with skinning. 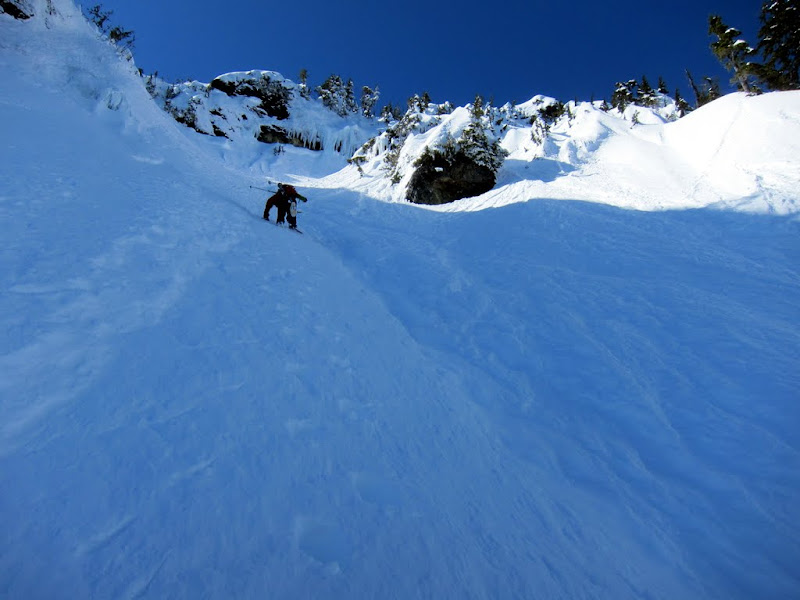 The views from this low (a bit over 6K) peak were nevertheless acceptable.
Glacier, Sloan, etc... 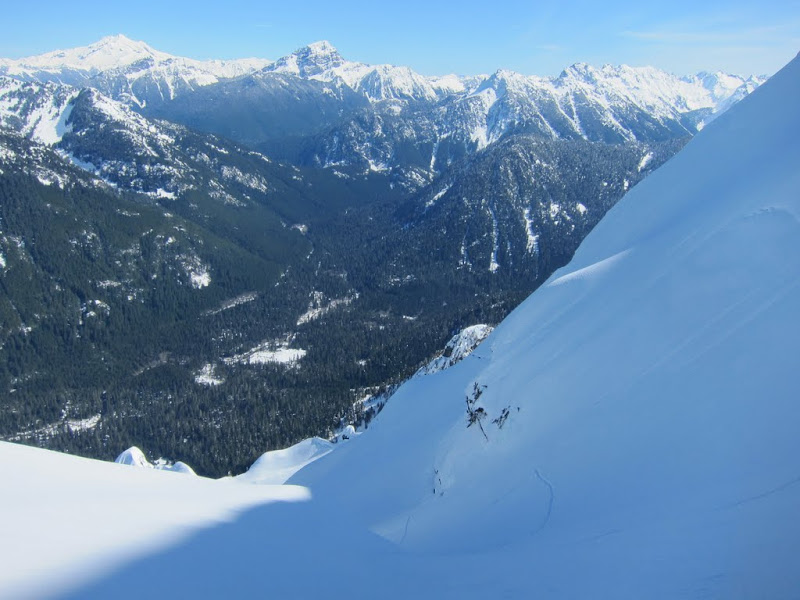 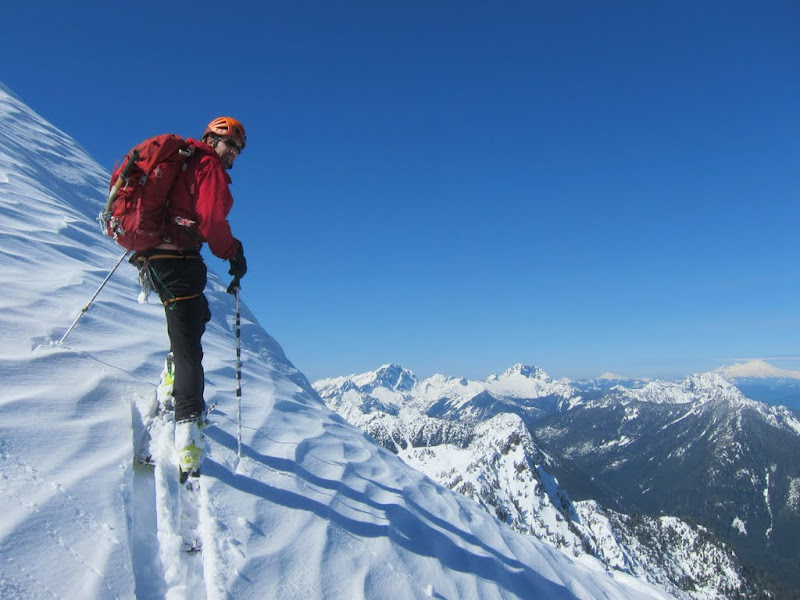 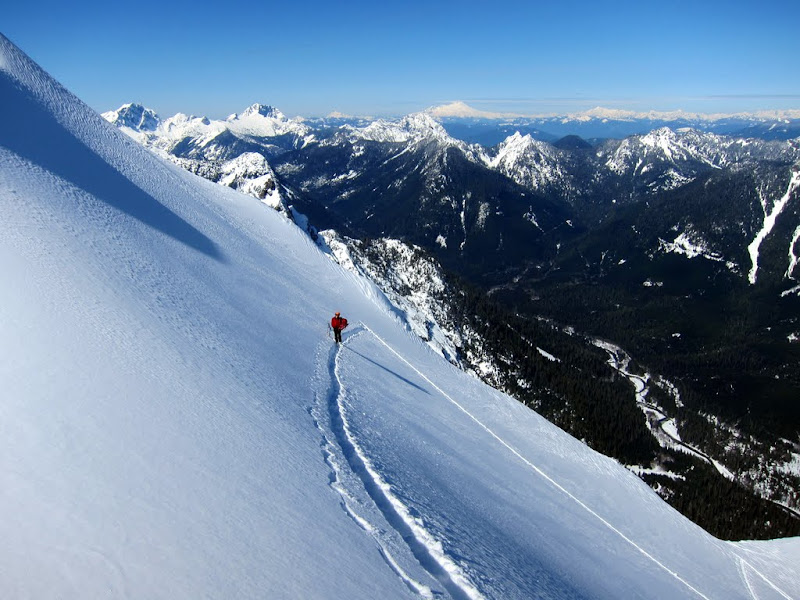 Finally to the summit ridge--so exposed on both sides. 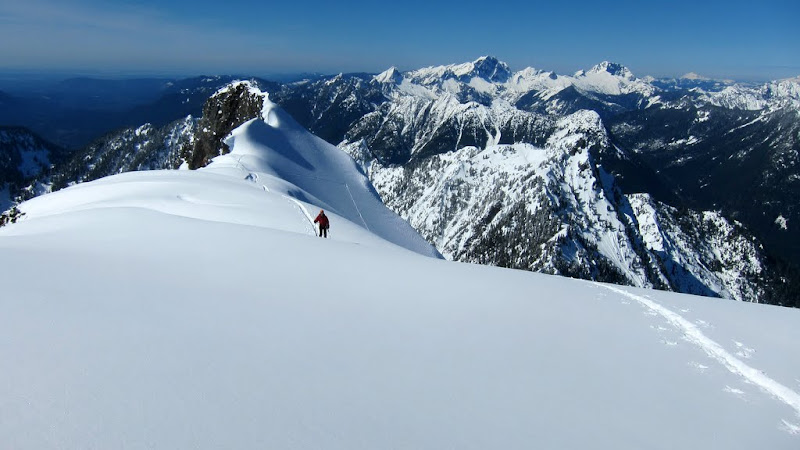 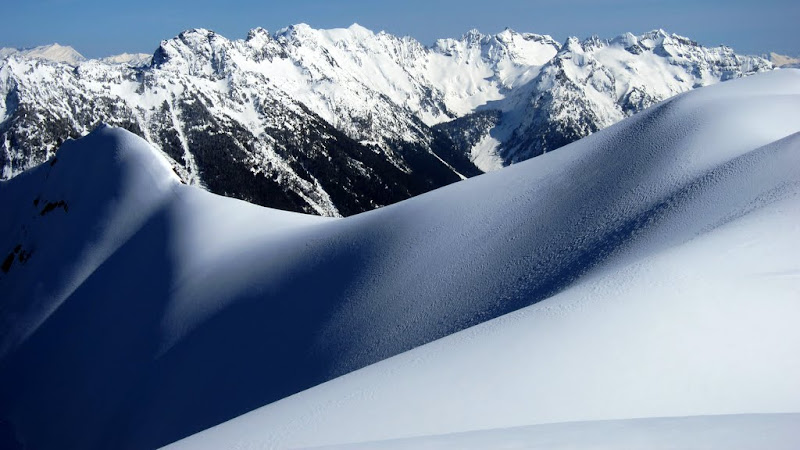 Vesper, with its rock climb looking darn near ski-able! 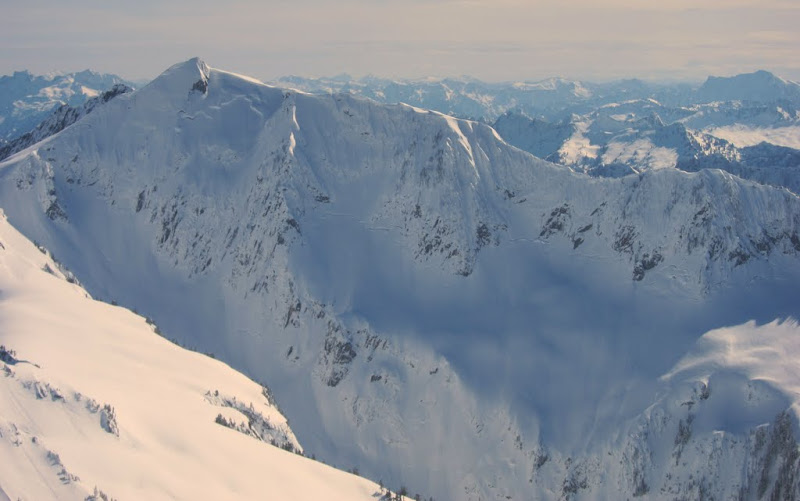 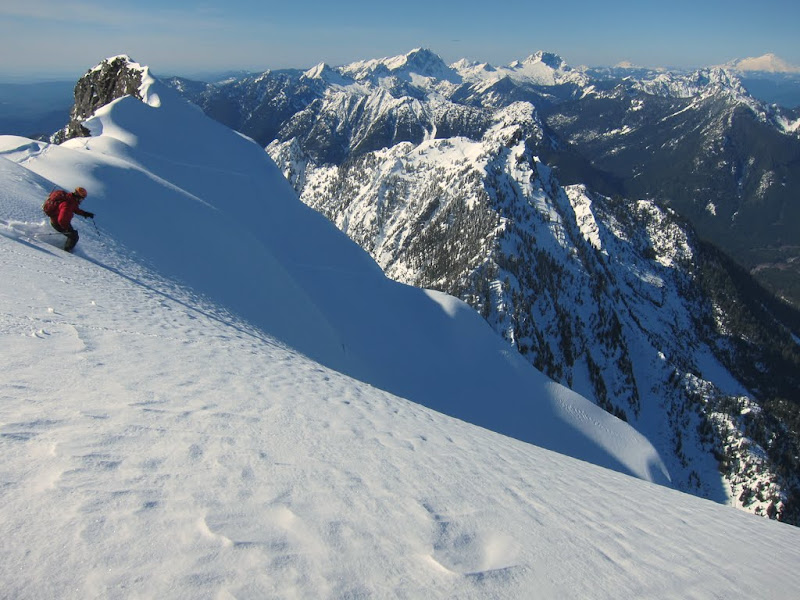 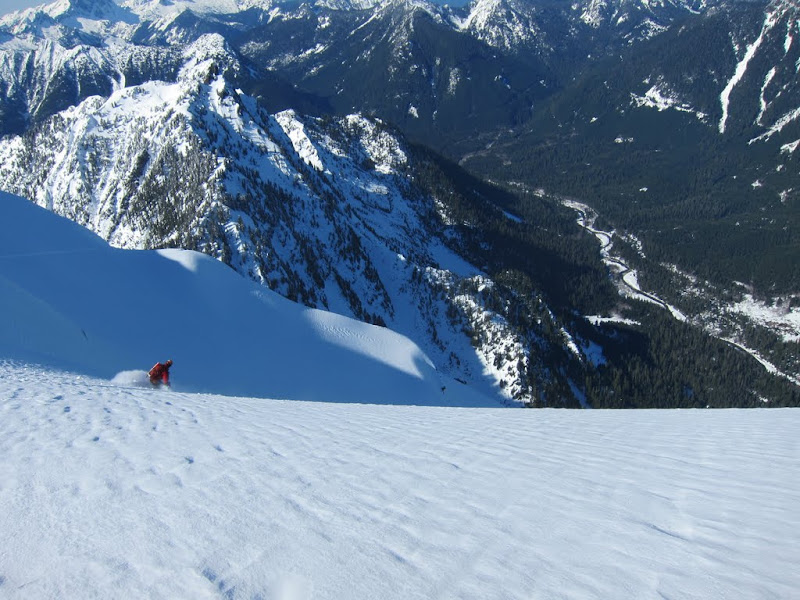 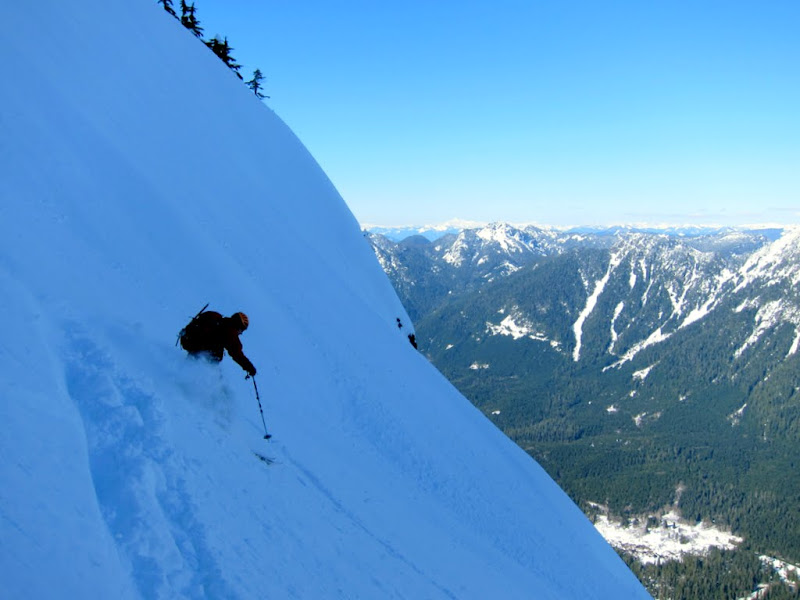 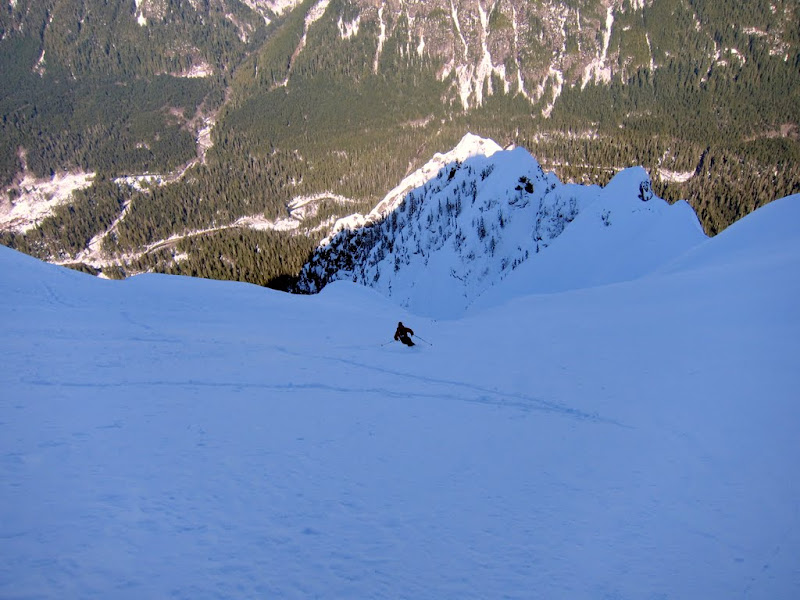 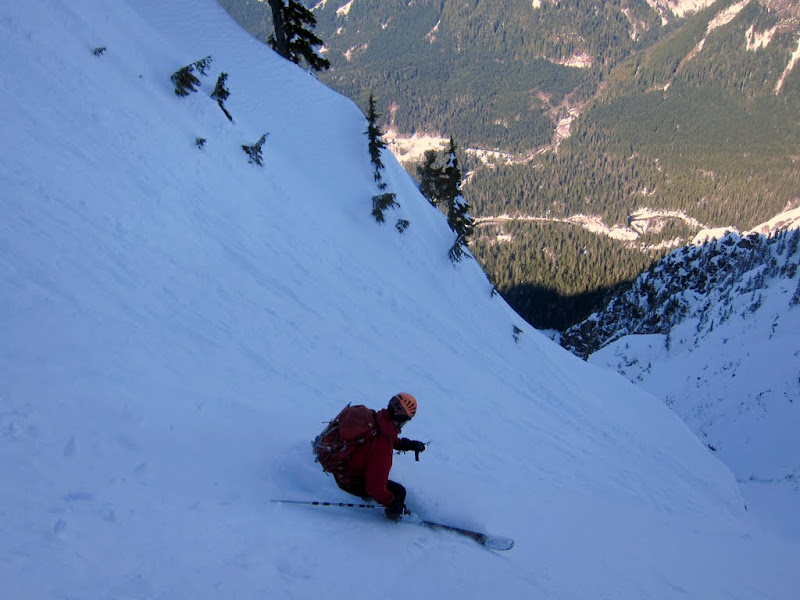 Dan is visible at the top of this pitch. 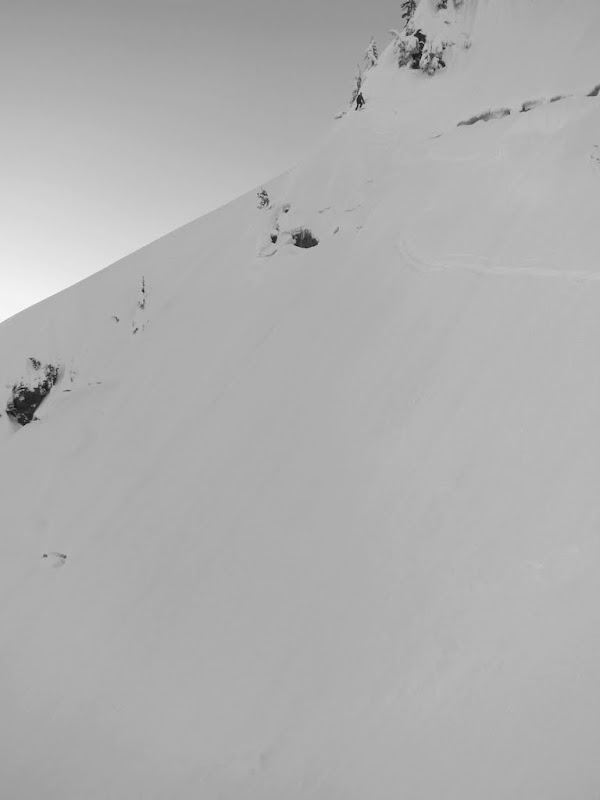 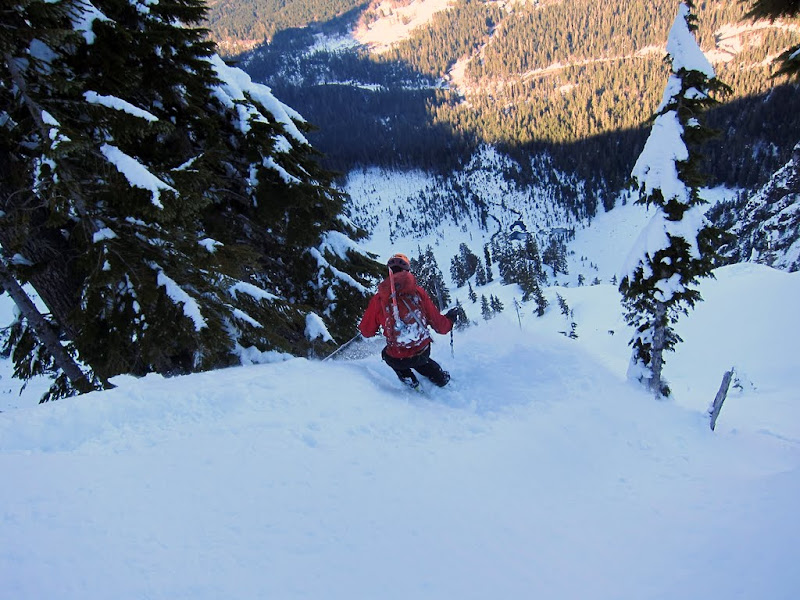 We then traversed the lower bowl above the final cliff bands waaaaay skier's left towards what appeared to be a ribbon of snow through the final trees. However, I impatiently dropped down a little too low before we got to that potential exit, and so we had one short rap off a tree to get to the valley floor. For future parties, I'm pretty certain there's a way through those trees way over on looker's right, just gotta stay high and be patient...

Sum: fantastic climbing and steep skiing experience with an incredibly solid partner--but you guys already knew that. In the right conditions, some of the other lines on the face will get skied, someday. Maybe this season

? A fistful of dollars (or better, some cold ones) to you folks when you ski it... 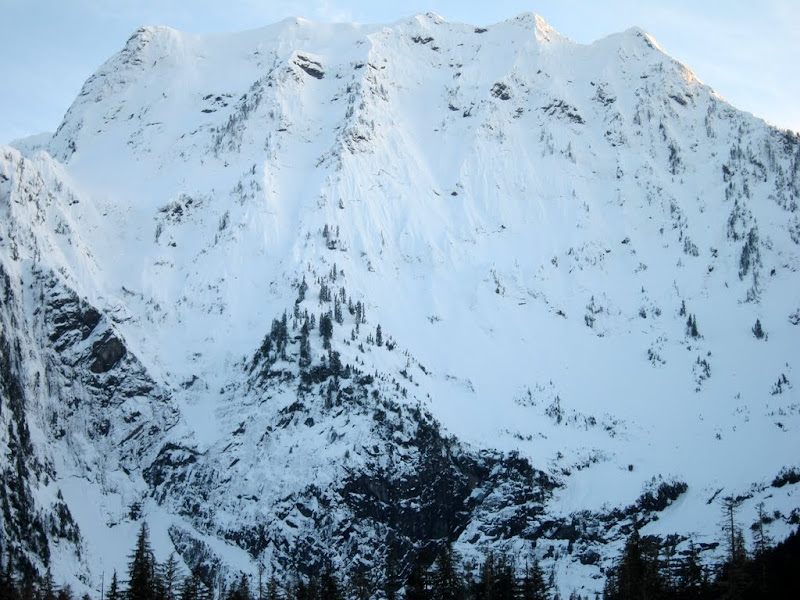 a few more pics here.
And Dan has posted a cool TR over on cc.com.
Top

What an unreasonable place to go skiing. Bring on the ice age.
Top

Interesting contrast going from that to the Sangre de Cristos in a couple of days. Such a big ski objective, yet I'm sitting at a much higher altitude here on my couch.
Top