East to West on Fitzsimmons & Iago

East to West on Fitzsimmons & Iago

Andy, Cam, Liam & I wanted to take advantage of the good travel and get back towards Fitzsimmons. We had aspirations of completing the horseshoe, although it became evident that we didn't have enough daylight to finish it. 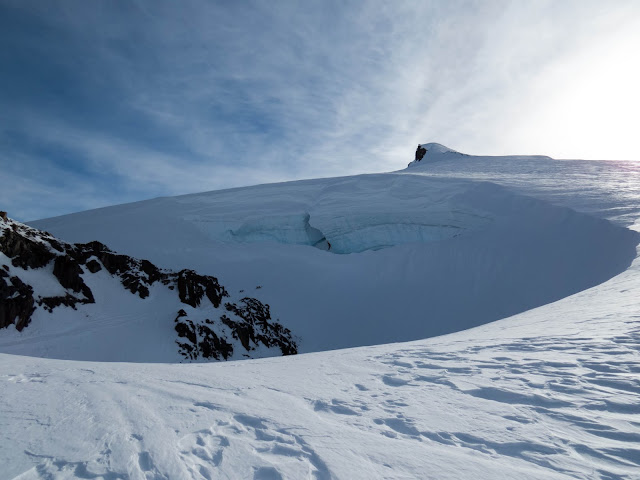 We found some french canadian cave dwellers in the col 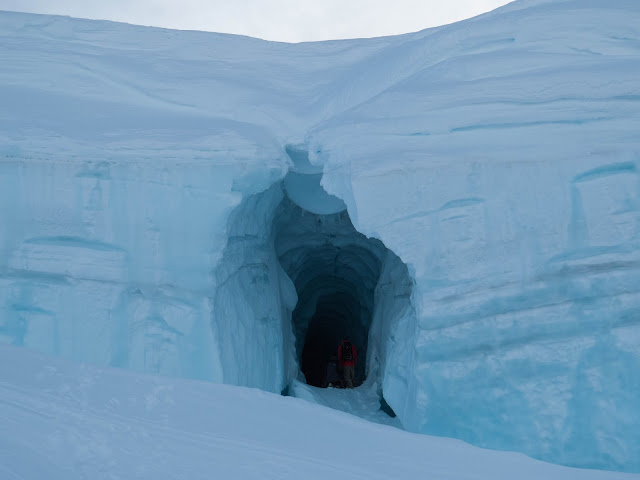 The high route of the traverse was well filled in, besides a couple open slots 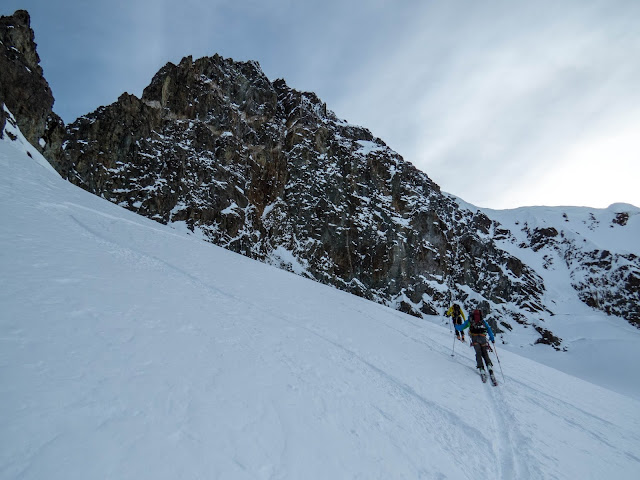 Crossing Overlord was SCARY. The traverse along the North side of Overlord was bullet proof wind board and was completely smooth. I went first and realized I couldn't get an edge in with my skins on. But too late, I was already committed. I just tried to control my slipping by maintaing enough speed to make it to the other side. I yelled back to be VERY careful, but Liam had already started. He also sketchily made it across. So instead I took my ice axe off my pack and waved it in the air to notify the others of just how serious it was. The other two slowly made their way across, heeding the advice. 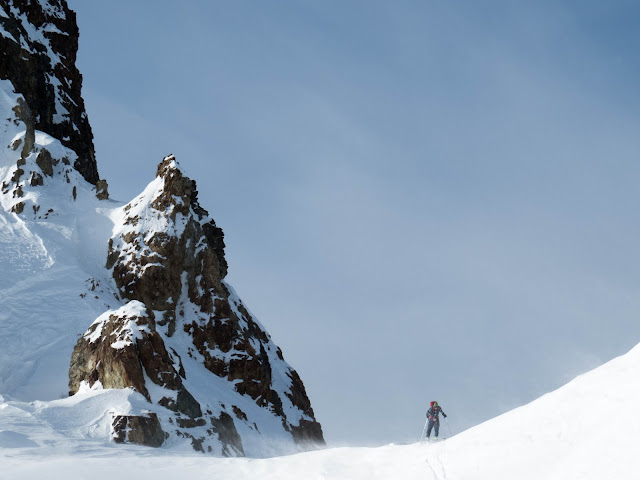 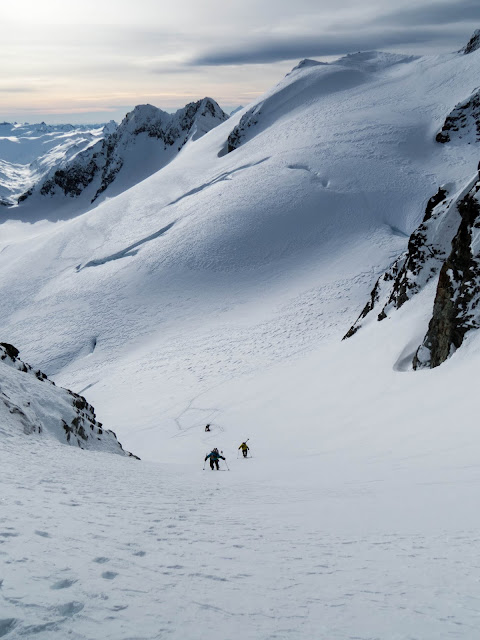 We summited Fitzsimmons and transitioned. The snow consisted of a crust over top of facets. Luckily the crust disappeared quickly and we got to enjoy powder on the NE face 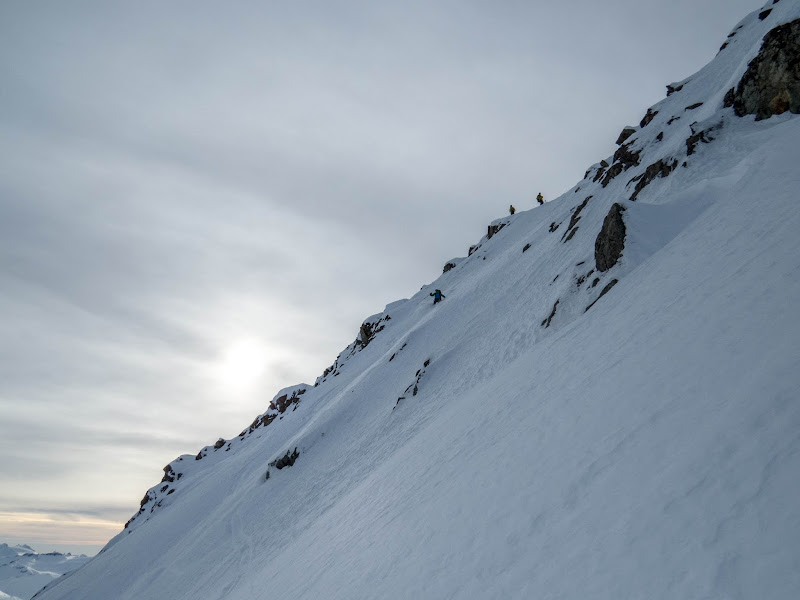 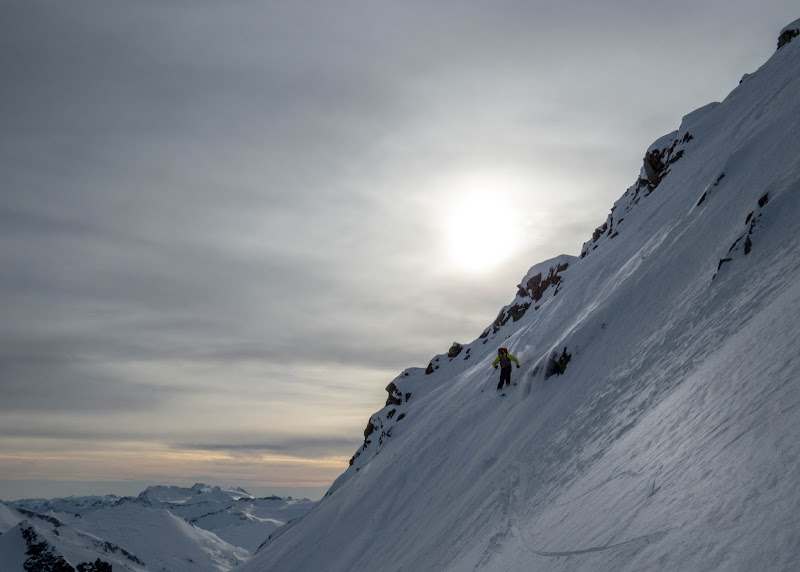 From here, we weren't quite sure about which route to take. It was fairly obvious (not completely) that the gulley we were in cliffed out at the bottom. Do we go right and pick our way through cliffs to get into it? Or left, and go over a blind roll-over on 50 degree slopes.
Liam does some route finding 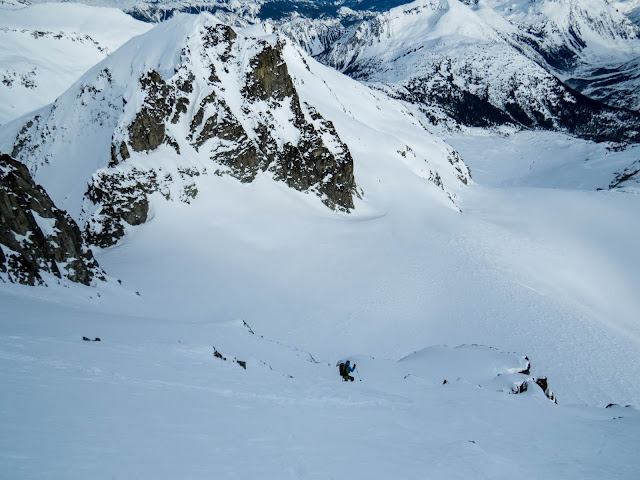 We made our way through a steep narrow section, then traversed over to the far side to get to better snow. The snow was good, although variable in places. It was mostly cruisy from here. 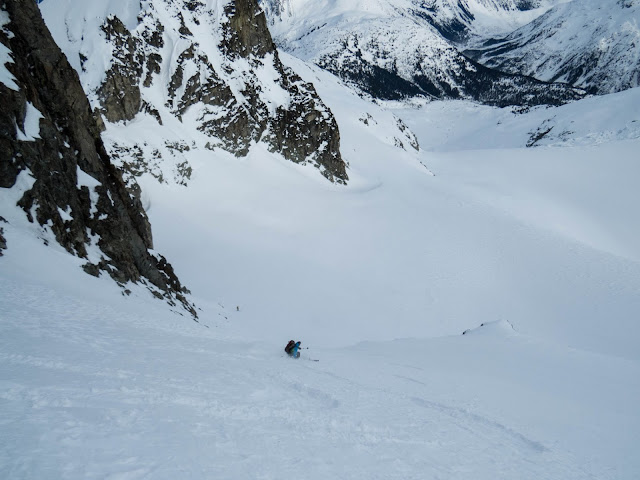 We skinned up to Iago and got confronted by quite the breeze... errr, gale. I gained the summit and quickly transitioned and skied down to the notch to gain shelter from the wind.
Cool view of the NE face from here... although Jason has a better picture (in Jason's picture we skied the sun-lit slope) 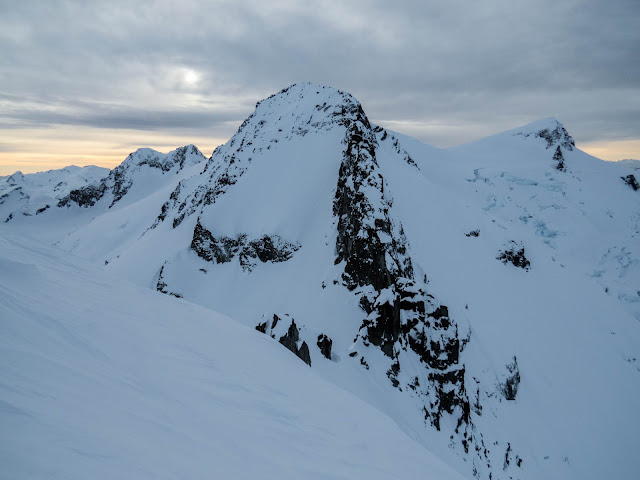 And then I waited... and waited. As I waited I tried to scope out the West face, but everytime I poked my head over, I'd get blasted by the wind and ice pellets would sting my face. The light was flat (thanks to the clouds that weren't in the forecast), and the wind made it harder to see.
"Does it look ski-able?" came the call finally
"uh... I think so" I replied, some hesitation in my voice

After some humming and hawing, Liam volunteered to go first on belay so we could test out the snow and see if it was edge-able. He side stepped the first few meters then did a jump turn. Seemed "okay". Maybe it'll get softer lower... This coins a new term "Doing stupid things safely"
I coiled the rope and went last. The face was A LOT scarier than in powder. It also seemed steeper. The first 30m were frightening, as the light was flat, the wind and ice pellets were howling, and the snow was wind board.
Once below the first few rocks, the snow quality improved to marginal.

Down near the glacier, the snow got downright OK. 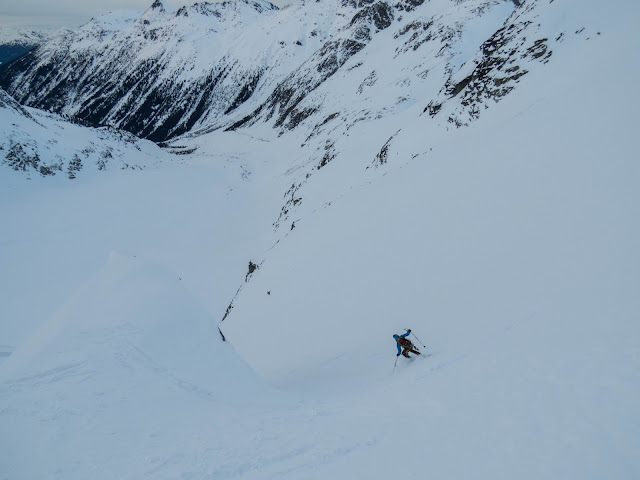 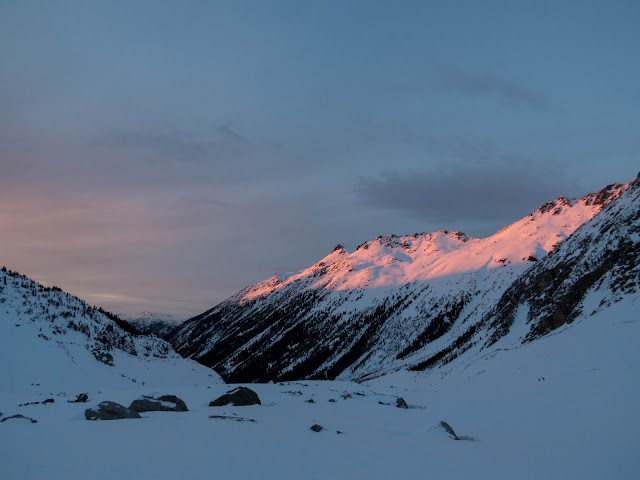 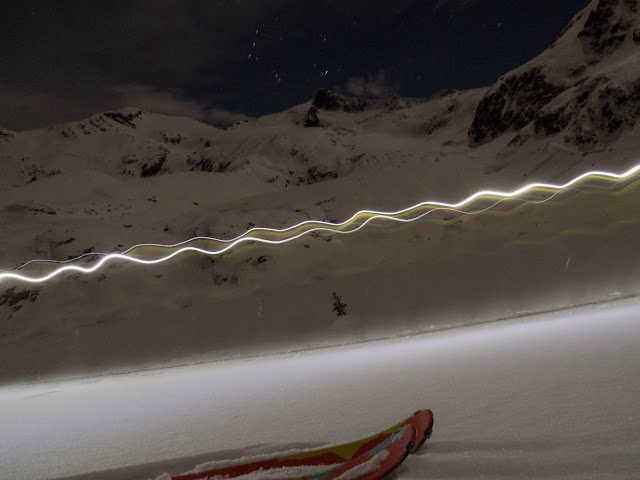 I've wanted to ski that face on Fitzsimmons for ages. But I'd like to do it with better conditions.
Top

That traverse from Overlord gets me everytime. Always bullet proof. Side hill skinning is not a good idea.
Good thing you waved the ice axe and Cam was quick on his feet. Otherwise I may have been watching
everyone ski from the bottom of the valley.

Sky, I remember you pointed that line out a few years ago. So I was stoked to ski it on this trip.Not ideal conditions
but alot better than I expected.

As far as Iago goes, it was variable at best. The first time I skied it with my brother. I pulled the Alex move
I was so excited to ski it, I dropped in waist deep powder out of the view of Mike. I was in the same spot in that
little alcove all safe. Meanwhile no one above new what was going on.It's just hard to see anything until you look
over the edge.
Top 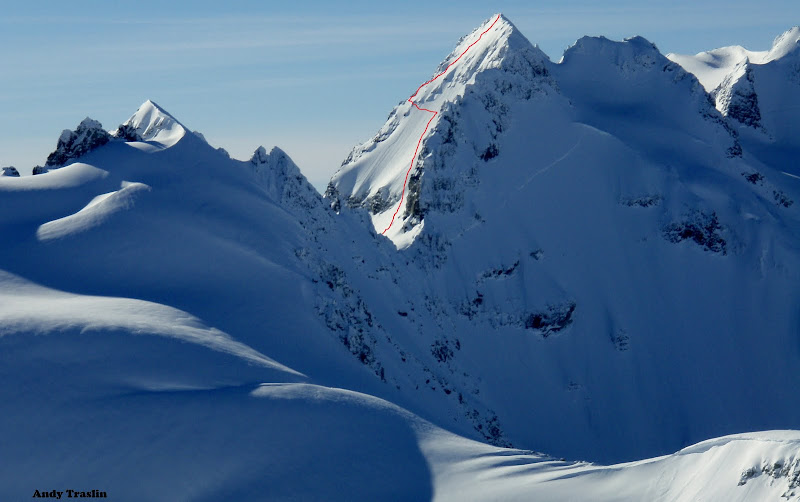 I just wanted to add the descent route for reference.
Top
Post Reply
5 posts • Page 1 of 1