It has been called "the Astroman of the desert" or something like that, whatever that means.

We had beers at camp after The Coke Explosion, because I wanted it to feel like a real vacation. And it did. Then we returned to the Temple of Siniwava to climb the first few pitches of Monkeyfinger while it was still warm, so we could afford to get a crack-of-noon (or later) start the next day to avoid climbing during the cold morning.

Mike solos toward the start. The first pitch is an unprotected 5.6 slab.

The slab and the sun obliterated my beer buzz.

Here I lead past the crux of the first "real pitch."

Mike leads the "11d-12b depending on finger size" portion of the next pitch. I was psyched to be able to make the moves free after a hang while seconding it. Tiny tips for fingers and dime edges for feet -- that varnished rock is so slick.

Then we fixed our ropes to do the vacation camping thing. Mike at the top of the first pitch on the descent.

Sunset on the Watchman.

My warmup pitch the next morning: a 0.5" crack through a big roof!

Mike follows the sustained fingers to the hanging belay from hell.

Another shot near the top of the pitch.

Mike leads up the pumpy thin hands pitch that follows.

The offwidth was surprisingly easy!

The slab pitch was not so bad. The rock turns to junk but at least the climbing gets easier. 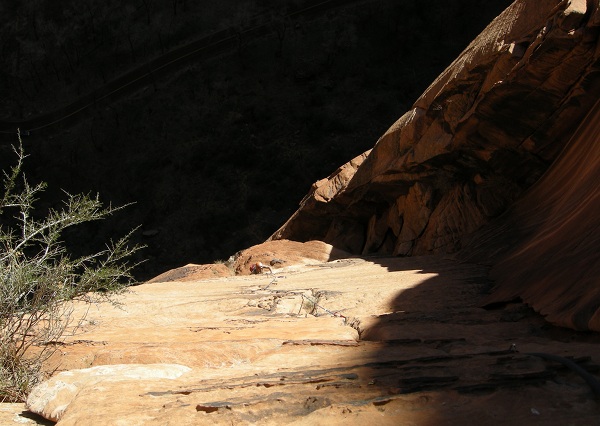 Mike heads for the final pitch 5.10 chimney, sandy as can be, "some serious desert hazing."

What a route! We celebrated with steaks and fingerpops galore.

Amazing! Awesome job for climbing all that.
Top

Looks like a stellar route! Definitely gotta get on that one
Between that and Shune's Buttress you guys ticked off a couple of the best free routes in the park....
Silverback looks enticing!
Top

Nice to some posts from you hoss! Looks like you had a well deserved phenomenal vacation.

Pics are are fantastic
Top