So Maddy & I had attempted to go do this on 2 other stupid days. So when another stupid looking weather day was on the forecast, I thought, hey, lets go play in a white-out on Wedge again. Except this time it was less of a white-out... kinda
(and we were well adapted to a white world from a week at North Creek)

I didn't really want to hike along the Wedge trail in ski boots (since I had forgotten my running shoes), so we chose to "skin" along a road that cut onto the Western flank of Parkhurst. The skin lasted for 200m, then we switched between boot packing and alder thrashing till we got a bit higher. The ridge was annoying because it had a lot of micro-terrain, but it seemed to get us up to where we wanted to go rather quickly. Here I skin towards the Wedge Couloir 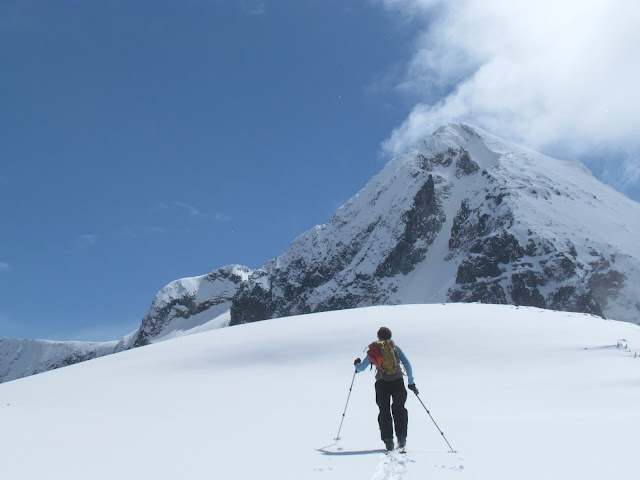 There was a pretty good cornice guarding the access to the easy S face slopes, so we skinned to the bottom of the couloir, and boot-packed up a slope to lookers right that led us onto the S face with minor difficulties. There were enough clouds that the S face was still relatively frozen, which meant that we only punched through the crust onto the scree every 5 steps. Progress was frustratingly slow thanks to this, so finally we made it to the top of the couloir after a 7000 ft. climb from the valley. There was a stationary sucker hole sitting over us that let us bask in the sun before putting our skis on.
A small pinch at the top of the couloir, with rocks that you can't see in the photo, was easily hopped over. Here Maddy approaches it 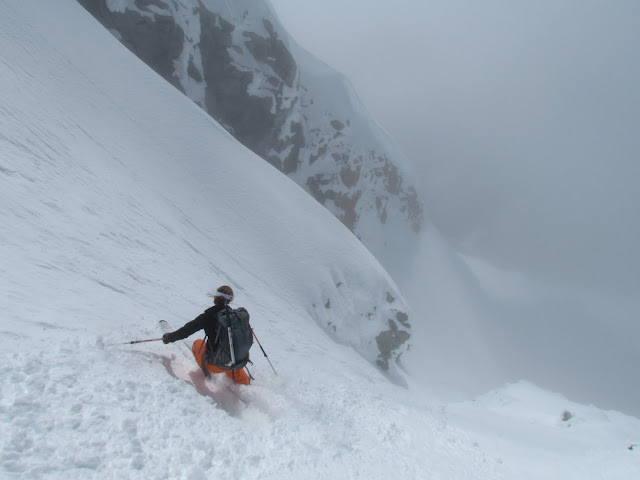 Then the couloir opens up. This thing is HUGE.
Cam drops into the clouds 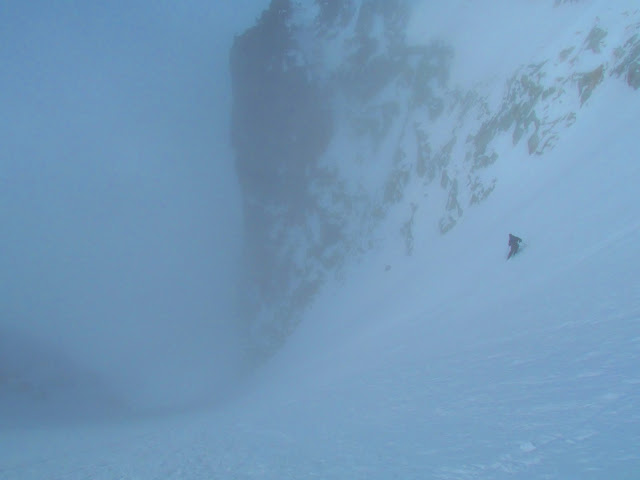 We had 15cm of pretty good snow on top of a crust, so as long as you were on fresh stuff, the skiing was awesome.

We traversed from the bottom of the couloir to the Wedge - Parkhurst col and skinned up for a short skin up to the summit of Parkhurst. And again, following the theme of the week, we got socked in. I walked around the perimeter of the summit, trying to figure out which couloir was the one we wanted to ski. Even going off of memory, it's hard to mistake this thing 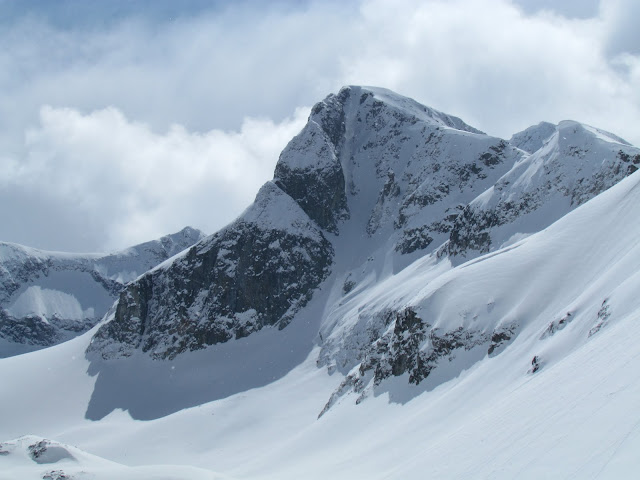 Cam seemed skeptical. He didn't want to ski down a dead end couloir in a complete white-out. Makes sense. But this was it. There was no doubt in my mind.
Maddy follows my lead 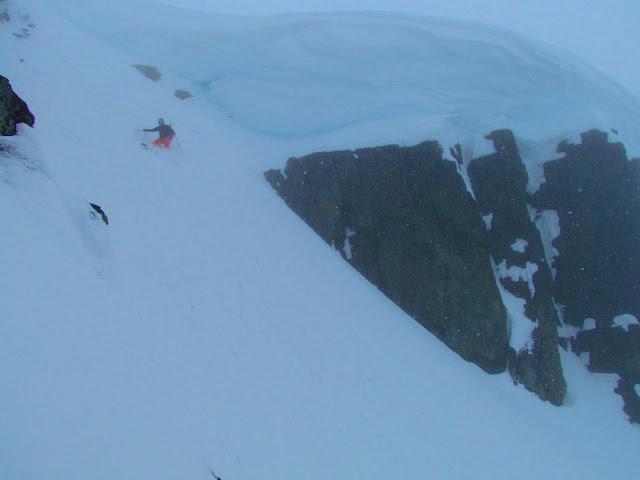 Then Cam came to join us just past the entrance.
The snow was even better than Wedge Couloir. The sluff was running so fast down the middle of the couloir that the center was the only thing you had to avoid. 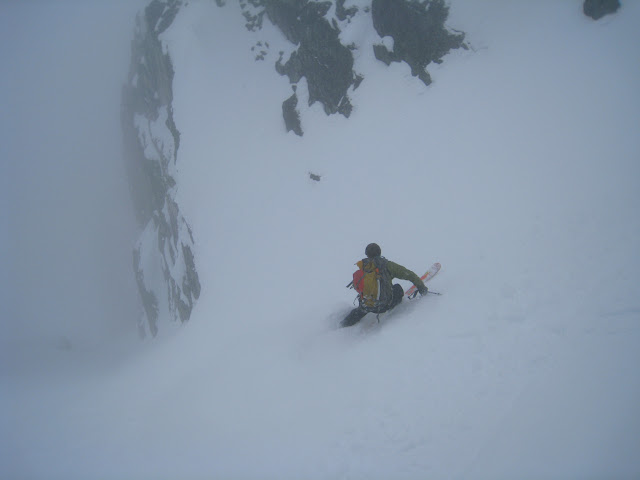 I waited downhilll of a large rock for shelter as Maddy came to join me. 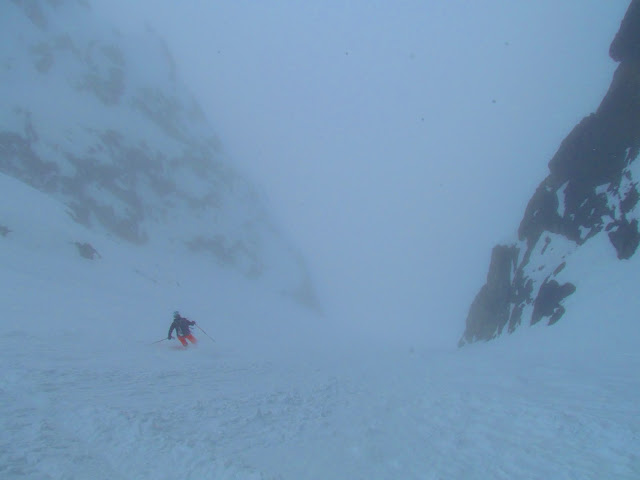 We skied the rest of the way down the couloir and traversed over to Wedgemount Lake. Freezing level was all the way up here, and we had almost 3000 ft. of isothermal mush to ski back down to the car.
Back down in the valley it almost felt like summer was near 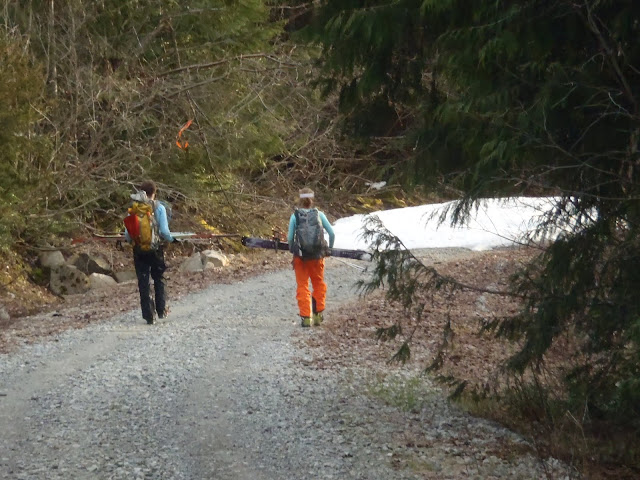 wow, stupendous link up! good job negotiating the white stuff in the sky and around your boots.
Top

Nice one. Go for the triple next time.
Top

We want to... staying at the hut the night before would make it a lot easier though
Top
Post Reply
4 posts • Page 1 of 1